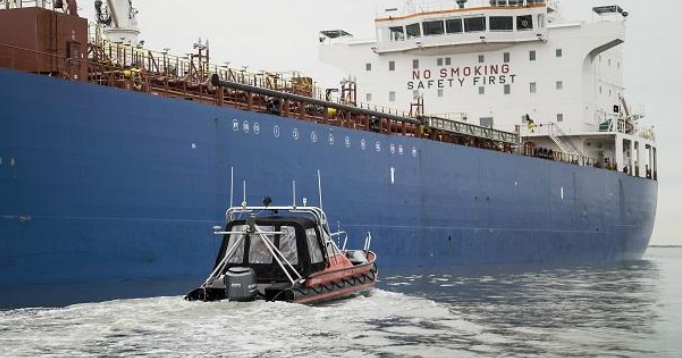 The Port of Amsterdam announced a pilot project deploying a sailing drone that inspects the depth of marginal ships at the locks of IJmuiden, in a bid to gain experience in new technologies in nautical processes.

Resulting from collaboration between Port of Amsterdam, the Dutch Customs Office, Seabed and Maritime Robotics, the pilot aims to provide more information and experience regarding sailing drone technology, which is expected to have a great impact on future nautical processes, along with autonomous vessels.

The experiment, which is underway this week, 8-13 July, has been set up in collaboration with Seabed. This system integrator from Amsterdam has brought over the research vessel ‘Telemetron’ of Maritime Robotics in Norway to the Netherlands for the test week.

Seabed provides the measurement equipment onboard the Telemetron. The Dutch Customs Office is also taking part in this pilot, which wants to scan the hulls of vessels entering the ports.

For the pilot, it was decided to examine the inspection process of marginal ships. Marginal ships are vessels of which the depth is such that they require an exemption for passing through the Noordersluis lock.

During the week, the drone will be deployed in various sub-scenarios for the depth inspection process simulation.

This will calculate the depth which, in combination with the salt level, determines whether the ship can pass through the Noordersluis lock or has to be made lighter.

During the test phase, the Telemetron will be ‘manned’ whilst the sailing drone will be able to sail (semi-)autonomously.

Safety is our number one priority, hence our decision to have a boatmaster on board the Telemetron during the test phase. We can test the autonomous sailing in a subsequent phase. Together with the various parties, we want to use this pilot to gain experience and insights into the possibilities, and so be prepared for what the future brings,