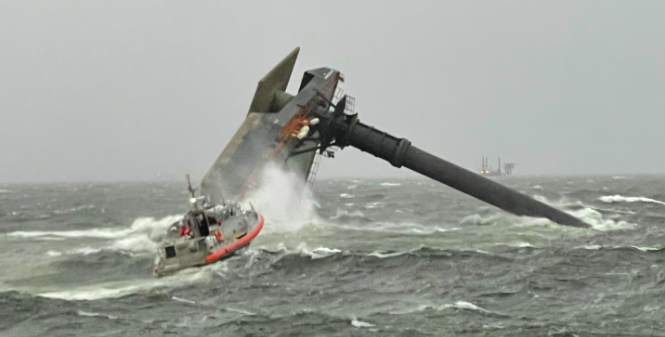 The National Transportation Safety Board issued a preliminary report for its ongoing investigation of the fatal capsizing of the liftboat Seacor Power, on 13 April 2021, near Port Fourchon, Louisiana.

At the time of the accident, there were 19 people aboard the US-flagged, 175-foot-long Seacor Power. Six people were rescued by the US Coast Guard and Good Samaritan vessels, six people died in the accident, and seven remain missing.

According to NTSB, the Seacor Power departed Port Fourchon at about 1:30 p.m. April 13, bound for the oil and gas lease area Main Pass Block 138 in the Gulf of Mexico. A weather report emailed to the vessel at 7:02 a.m. that day predicted afternoon winds at 9 to 12 knots from the southeast with 3-foot seas.

NTSB investigators learned that at about 3:30 p.m., as the Seacor Power transited the open waters of the Gulf, a squall passed over the liftboat.

With visibility dropping and winds increasing significantly, the crew decided to lower the Seacor Power’s legs to the seafloor to hold the vessel in position until the storm passed.

The crewmember at the helm attempted to turn the Seacor Power into the wind as the legs began to descend. Before the turn was completed, the liftboat heeled to starboard and capsized.

NTSB investigators also learned several people were able to escape onto the exposed, port side of the Seacor Power deckhouse. High winds and seas that had built to 10 to 12 feet prevented rescuers from reaching those who remained on the liftboat. Some were washed into the water and six were eventually rescued, with one survivor suffering a serious injury.

It is noted that the information in the report is preliminary and subject to change. When the Seacor Power is salvaged NTSB investigators intend to return to inspect the vessel and collect further evidence.