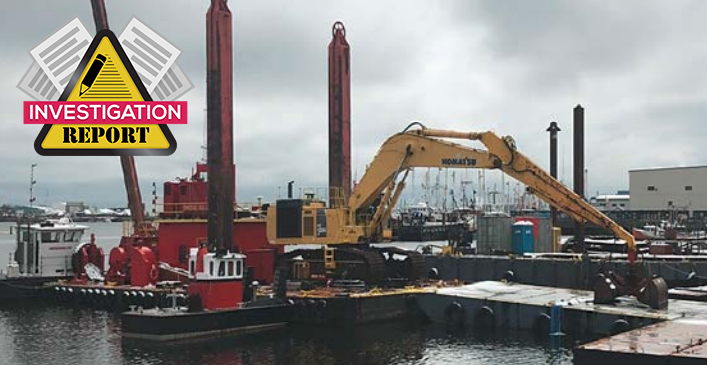 The NTSB issued an investigation report on the capsizing and sinking of Barge Dredge200 and a workboat while on Massachusetts Bay, in December 2018. The accident was a result of a poor judgement amid inclement weather conditions.

On December 2, 2018, about 0930 local time, the towing vessel Big Jake was underway in Massachusetts Bay towing five barges and two workboats when the tow broke apart.

As a result of the breakaway, the barge Dredge200 and the workboat R.E. Pierson 2 both sank.

Although both sunken vessels had fuel and lube oil onboard, no visible oil sheen or pollution was reported.

NTSB determines that the probable cause of the capsizing and sinking of the Dredge200 and the R.E. Pierson 2 was the decision by the tow captain and owner to attempt a transit in forecasted wind and waves that exceeded their original plan for the voyage.

Based on crew statements, the source of flooding that led to the sinking of the Dredge200 was likely hull damage from contact with the Big Jake when the tow broke apart.

The contracted date for dredging to begin at the Hingham shipyard was November 1.

The Big Jake and its tow departed over a month behind schedule on November 30 due to delays in obtaining equipment for and assembling and preparing to move the tow.

The opportunity for a favorable weather window diminished with the onset of winter, which would have factored in the decision of the owner and captain to continue their transit despite an unfavorable weather forecast.

The Big Jake’s crew stated that the Cape Cod Canal traffic controller delayed their transit through the canal which resulted in them getting caught in bad weather on the other side.

However, it appears that that the agency followed their standard protocols and processes to ensure safe passage of vessels when assigning the transit time.

According to the controller, they would typically restrict the canal to one-way traffic for a tow of this size/configuration.

Additionally, when restricting to one-way traffic, they would time the passage to a fair tide to minimize the disruption to other canal traffic.

Further, the captain and owner waited for hours for their opening in the canal and had ample time to evaluate the weather forecast for the rest of their voyage.

Although the captain and owner had a discussion regarding a plan for the tow configuration and set a limit of 4-foot seas for the voyage, they proceeded through the canal and into Cape Cod Bay despite knowing that the weather forecast called for seas that exceeded the limits they established for the voyage.

The pre-planning phase carried out by the captain, owner, and customer proved to be ineffective.

In particular, there were no safe harbors or alternate routes identified in case heavy weather should be forecasted during the voyage.

Once the captain and owner decided to continue their transit after departing the Cape Cod Canal, they had to travel about 43 miles (about 8 hours at the transit average of 4–5 knots) through the relatively unprotected waters of Cape Cod Bay and Massachusetts Bay, with limited safe harbors should the forecast weather overwhelm the tow before their destination in Hingham.

Owners and operators should develop voyage plans that assess prevailing weather conditions and anticipate changes along the intended route.

Regardless of requirements, planning and preparation before a tow commences is critically important, including the identification of safe harbors along the route and adherence to operational limits. 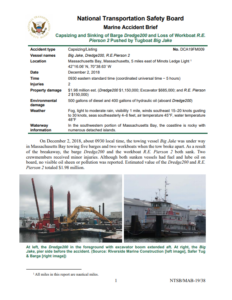