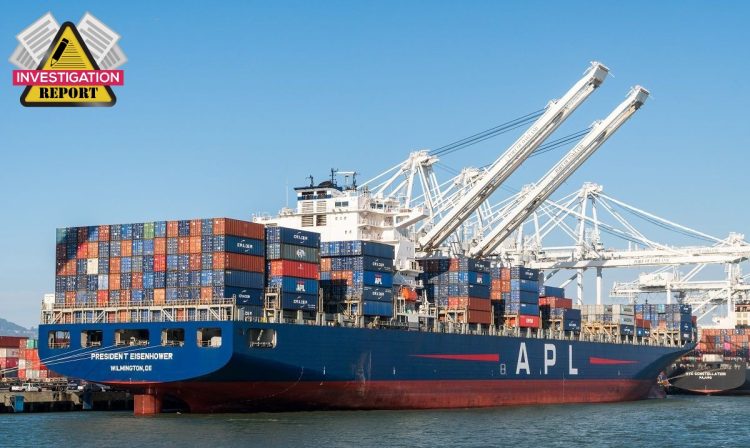 NTSB published its report on the engine room fire aboard the containership President Eisenhower, that took place on April 28, 2021, off California.

On April 27, 2021, at 1900, after completing cargo operations, the partially loaded President Eisenhower departed the Port of Los Angeles en route to Oakland, California, with a crew of 22.

At midnight, on April 28, the President Eisenhower was about 6 miles south of Port Hueneme, California, navigating the northwest-bound traffic lane of the Santa Barbara Channel at a speed of 17.5 knots with the main engine operating at 68 rpm. The navigation watch group consisted of a third mate and two able seamen (AB). The master’s night orders included instructions to gradually increase the main engine’s speed to a maximum of 80 rpm, so the third mate coordinated with the second engineer (the designated duty engineer), who was in the engine control room (ECR) by means of the shipboard telephone. The first engineer was also in the ECR assisting with the preparation of the engine for the ordered rpm. The third mate increased the engine rpm in increments of 4, from 68 rpm up to 80 rpm. Following each step increase, the second engineer locally confirmed that the engine and other machinery had responded appropriately to the change and were operating as desired. This speed increase, also referred to as engine loading, took about 40 minutes.

At 0042, once the engine was operating at 80 rpm, the second engineer and first engineer exited the ECR, and each began to conduct a separate walkthrough round of the engine room to ensure all machinery was operating correctly. At 0052, both engineers returned to the ECR. The third mate stated that at this time, the engineers informed him that the engine and machinery were “looking good.”

About 0154, one of the ABs on watch (AB1) was on the starboard bridge wing when he noticed smoke coming from an open engine room hatch located a few feet port of midships, below on the upper deck just aft of the house. He quickly entered the bridge and notified the third mate. About the same time, the fire control panel on the bridge alarmed, indicating that a flame or smoke detector in the engine room had activated. The third mate immediately called the captain, who reported to the bridge.

Additional detectors were triggered within the engine room, and the vessel’s general alarm automatically activated. Using the CCTV monitor on the bridge, the captain and third mate confirmed that there was an engine room fire. En route to his emergency muster station in the portside safety storeroom, AB1 verbally alerted crewmembers that were off duty in their cabins of the fire in the engine room. 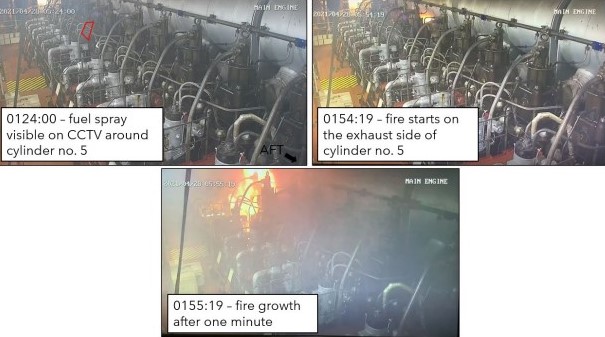 CCTV footage showed that about 0124, while the containership President Eisenhower was under way at night, ultra-low sulfur diesel fuel began spraying in the
area around the main engine’s no. 5 cylinder, about 30 minutes before the fire started. The engine room was unattended at the time, and the leaking fuel went unnoticed. Although not installed aboard the President Eisenhower, CCTV video analytic technology exists that can be integrated into an existing system. This technology was approved by the vessel’s classification society as an acceptable method to identify fuel mist in real time and alert the crew of the dangerous situation. Had this technology been in use aboard the President Eisenhower, because of the length of time fuel was spraying before ignition (30 minutes), there is a chance the fire could have been avoided.

A post-casualty examination of the vessel showed that a compression fitting on the end of a newly installed section of fuel return tubing had disconnected, causing the fuel oil to spray (the return system pressure was 116 pounds per square inch). For 30 minutes, the fuel continued to spray, and eventually, it ignited off a hot surface and started a fire. Ultra-low sulfur diesel fuel is a highly combustible liquid with a standard flashpoint of 140°F and an average autoignition temperature of 428°F.9 To prevent combustible liquids, such as diesel fuel, from contacting surfaces that exceed temperatures of 428°F, SOLAS regulations require that such components be properly insulated, and the Coast Guard issued a Marine Safety Alert in 2017 to mariners recommending that they regularly check heat sources to verify compliance. However, after the fire, investigators found that an exhaust valve compensator flange on the no. 5 cylinder—which was subject to internal engine exhaust temperatures greater than 428°F (often as high as 600°F)—near the disconnected fuel return tubing end was exposed and not insulated. Therefore, it is likely that the unshielded and uninsulated exhaust valve compensator flange acted as an ignition source for the spraying diesel fuel.

The crew’s response to the fire was timely and effective, and their activation of the ship’s fixed CO2 system to extinguish the fire was such that a specialized marine firefighter concluded it “was just textbook perfect.” The vessel’s fire-detection and alarm system activated and notified the crew moments after the start of the fire. Within 10 minutes, the crewmembers were fully mustered, and the fire teams had run out fire hoses and started boundary cooling.

The National Transportation Safety Board determines that the probable cause of the engine room fire aboard the containership President Eisenhower was a crewmember insufficiently swaging a compression fitting ferrule during the installation of fuel oil return tubing for a main engine’s cylinder, allowing an end of the tubing to disconnect and spray fuel oil onto a nearby unshielded and uninsulated cylinder exhaust component.

Rapid oil leak-detection systems are a valuable tool that can be used to prevent fire in machinery spaces. Video analytic technology is designed to use standard CCTV video to detect fuel mist and spray in real time and alert the crew before any ignition and fire. This technology is supported by class societies as an acceptable method for identifying leaks and can be integrated with existing CCTV systems. Had this technology been in use aboard the President Eisenhower, the spraying fuel oil may have been detected well before the fire developed.

The crew of the President Eisenhower effectively contained the spread of a main engine room fire by removing fuel and oxygen sources, cooling boundaries, and communicating effectively. These efforts show the importance of realistic scenario-based training, including engine room emergencies, which involve shutting down machinery, fuel oil, lube oil, and ventilation systems, as well as boundary monitoring, to quickly contain and suppress engine room fires, which can spread to other spaces and/or cause a loss of propulsion and electrical power.