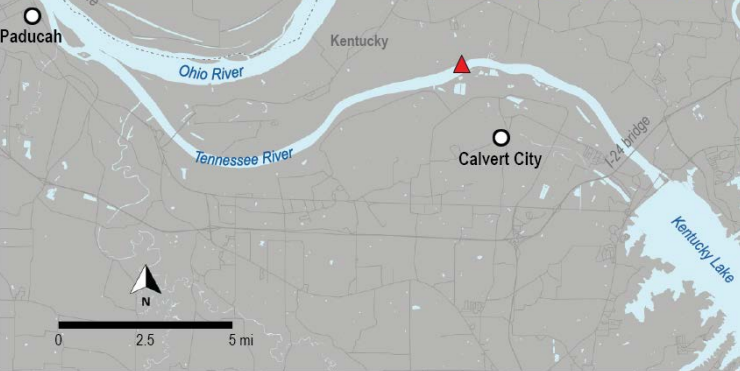 Area where the Tom Bussler flooded and sank / Credit: NTSB

NTSB issued an investigation report on the flooding and sinking of towing vessel 'Tom Bussler' on Tennessee River in January 2019. The incident stressed issues associated with lack of an effective hull maintenance and repair.

On January 7, 2019, about 2030 local time, the towing vessel Tom Bussler was transiting in light boat condition (no tow) upbound on the Tennessee River at mile 15 near Calvert City, Kentucky, when it began flooding and quickly sank in the channel.

Both crew members aboard abandoned the vessel into the river and were rescued by a Good Samaritan vessel. No pollution or injuries were reported.

The National Transportation Safety Board determines that the probable cause of the flooding and sinking of the tugboat Tom Bussler was the company’s lack of an effective hull maintenance and repair program, which resulted in flooding into the bow voids and engine room through fractures in the hull.

The vessel had last been drydocked in January 2018, about a year before the accident. No hull repairs related to watertight integrity were scheduled or completed.

Throughout 2018, multiple issues with the hull were reported by crew members.

However, attempts to find the leaks were unsuccessful, and the reported issues were not resolved. Instead, portable pumps were used to control the water ingress.

The postaccident survey showed seven pre-existing hull fractures that compromised the integrity of the bow voids, the centerline aft void, and the engine room.

When the vessel was pushing a barge ahead, its bow was protected from the bow wave by the barge ahead, and the pre-existing fractures in the hull therefore remained above the effective waterline.

However, at the time of the accident, the vessel was under way in light boat condition, without a barge to deflect water, and the bow therefore was subject to the water build up as it moved through the river.

Intermittent flooding of the bow voids likely began as water from the bow wave entered fractures in the forward part of the hull.

As the vessel’s forward draft increased (from the flooding), fractures in the hull near the bow were submerged, allowing water to enter into the voids at a higher rate.

Additionally, water that went over the bow and onto the main deck flooded the bow voids through fractures and leaking hatches, until the vessel lost stability, capsized, and sank, bow first.

Although the crew knew about and reported several hull leaks to management in the months prior to the accident, the lack of hull repair evidence and daily pumping of the towboat’s voids indicated that management did not address issues with the vessel’s watertight integrity in a timely manner.

The company’s SMS required senior management to evaluate and determine if reported problems were critical or non-critical and approve and coordinate any maintenance that impaired a vessel’s maneuverability.

The lack of action by the operating company to repair these several known hull deficiencies in a timely manner, once identified by the vessel’s crew, was counter to the guidance outlined in their SMS, and was directly related to the flooding.

To protect vessels and the environment, it is good marine practice for owners to conduct regular oversight and maintenance of hulls, including between drydock periods.

Regardless of inspection requirements, owners are obligated to ensure vessels are properly maintained, equipped, and operated in a safe condition. Issues with watertight integrity and wastage should be addressed immediately. 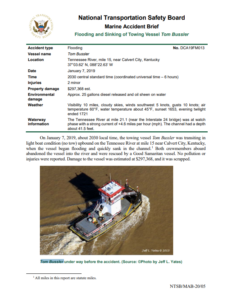