The German Bureau of Maritime Casualty Investigation published its report on the Panama-registered bulk carrier Glory Amsterdam, which ran aground about 1.6 nm north of the German North Sea island of Langeoog.

The ship was sailing in ballast and in spite of two anchors being dropped drifting in a southerly direction from her anchor position, which was 18.5 nm from the subsequent scene of the accident, in hurricane force winds since early in the morning on the day of the accident. The Glory Amsterdam was waiting there for the next cargo order.

The master notified the vessel traffic service (VTS) responsible for the area, German Bight Traffic (GBT), about his problems. He had already phoned the German agency that had supported his ship in Hamburg to request tug assistance.

Since the VTS had doubts with regard to the short-term availability of a suitable vessel, as the further course of events confirmed were justified, it took the precautionary measure of ordering the emergency towing vessel (ETV) Nordic, which was some 10 nm away from the Glory Amsterdam, to proceed to the distressed vessel by phone.

Not least because of the considerable problems the Nordic and the VTS experienced while discussing the measures needed to manage the emergency situation with the Glory Amsterdam's master in English, the Cuxhaven-based CCME3 decided to transfer the boarding team (BT) stationed on the Nordic (BT NORDIC) especially for such tasks to the distressed vessel to assist with communication and provide technical support during the necessary emergency towing operation.

Since the risk of the Glory Amsterdam running aground was increasing all the time, the VTS ordered the distressed vessel to slip her anchors and move to deeper water under her own steam.

The first, initially only sporadic indications of grounding were felt on board the Glory Amsterdam, causing, inter alia, the stern of the distressed vessel to occasionally settle on the sea floor. This caused a mechanical damage to the rudder blade and its support system, meaning the Glory Amsterdam had to be classified as completely not under command (NUC) from this point at the latest.

The Glory Amsterdam finally grounded in the area of the 5 m depth contour north of the island of Langeoog. Immediately arranged inspections on board revealed that the grounding had apparently not damaged the shell plating. At no time was water ingress or escaped pollutants detected.

The BSU reported that the ship's command of the Glory Amsterdam had not unequivocally understood the Nordic's mission and legal basis upon which she was operating at the scene, even when BT Baltic Sea arrived on the distressed vessel late that afternoon.

Throughout the day and depending on the situation, the ship's master repeatedly wavered between the assumption that the NORDIC was the tug assistance he had ordered early that morning and the fear that the Nordic would act as a commercial salvage tug.

In the report, BSU proceeded to make the following suggestions: 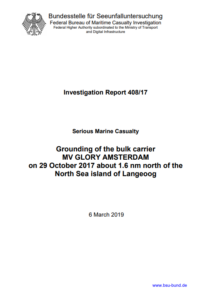