Working onboard a ship is a routine; Seafarers, regardless their ranking, live, interact and sometimes perform functions in the same place. Active engagement in things has a real and positive impact on seafarer’s welfare. The “Mission to Seafarers” gave a voice to 8,000 people working on the oceans to express their feelings representing the approximately 1.647.500 men and women seafarers globally. In particular, the association re-launched a major shipping industry initiative - the Seafarers Happiness Index (SHI) - an ongoing study into how those at sea feel about a range of key areas which impact them.

The study presented thought-provoking statistics with respect to the current average Seafarer Happiness level. Past surveys in 2015 and 2016 reported levels of 6.46 and 6.41 out of 10 respectively, while the current data establish a downward trend which raises important discussions as to what can be done to address this decline.

According to the returns submitted to the Seafarers Happiness Index during the period of this report, the 2017 Q4 average Seafarer Happiness level is 6.25 out of 10. 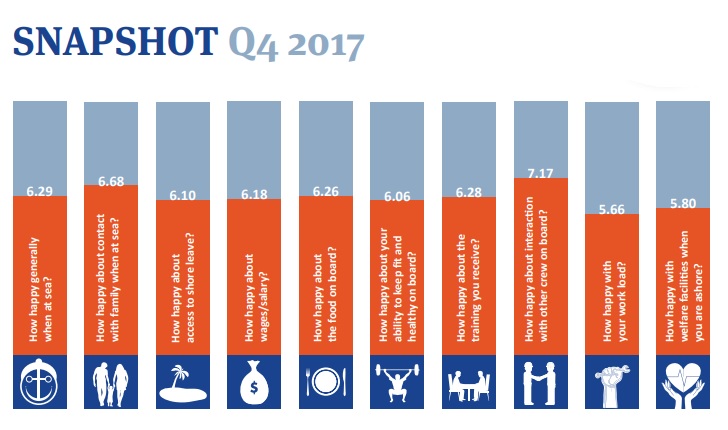 Seafarers interaction on board

Crews are still able to get along in modern shipping, as they did in the past. Responses regarding communication, interaction and team building more were recognized and seen as being the most positive . However, language issues were felt to be a barrier at times, and there were concerns that cliques and divisions can occur when certain nationalities excluded others. Some felt that cultural barriers will always exist, and that multicultural crews are a barrier to social cohesion.

Seafarers were overwhelmingly critical of companies who either do not provide internet or call access, or who make it expensive or low quality. There is also dissatisfaction onboard when masters made the decision to remove or to limit access. Younger seafarers (below 35) stated that internet access plays an important role to seafarer’s welfare.

Training is vitally important given that at all levels it affects the standards of safety, operations and effectiveness of crew. However, seafarers have widely divergent views; Younger seafarers are keen to learn and gather qualifications, so they could climb the career ladder. While amongst many more senior seafarers there is a sense that much of the training is merely a tick box exercise for the company.

It is beyond a doubt that a healthy diet means a lot for seafarer’s welfare. However, respondents commented on the excessive use of oil in the cooking. It seems the use of fatty foods and frying is an issue keenly felt by seafarers!

In the past few years there has been a reduction in shore leaves granted to the seafarers. Shore leave is a perennial problem for the modern seafarers who expressed a need for reliable, cheap/free transport. They want to be able to relax and feel refreshed but recognize that short turnaround times and “uncoordinated” vessel visits by authorities make this all the more impossible or unlikely.

Measuring seafarer’s welfare may help measure progress and growth, understand how we safeguard the future of shipping industry. On this Seafarers Happiness Index, workload and onshore facilities presented the largest setbacks (see graphic above)

Why the issue of workload brought most dissatisfaction to seafarers?

When hours of rest are not being followed, and overtime agreements being renegade on, seafarers dissatisfaction regarding workload stands to reason. Seafarers usually state poor management of manpower on board ships as a reason for increase in work load. It is of essence that workload was also responsible for impacting other key happiness indicators. For instance, even if exercise equipment was provided, seafarers don’t have the time to exercise. In addition, heavy workloads in ports are impacting the availability of shore leave.

We often see discussions around the recruitment, retention, training and provision for seafarers in the shipping industry. However, these conversations are too often based on assumption and anecdote rather than real data. By re-launching the Seafarers Happiness Index we are working to provide reliable information so that the industry can build a sustainable workforce for the future of the industry.

Although this Mission to Seafarers report on happiness presented some really important positives, there are many troubling issues that need to be addressed such as isolation, loneliness and a lack of connectivity which are striking at their hearts and need to be managed in order to ensure that crews remain both committed and engaged.

We must work to make life at sea happier.