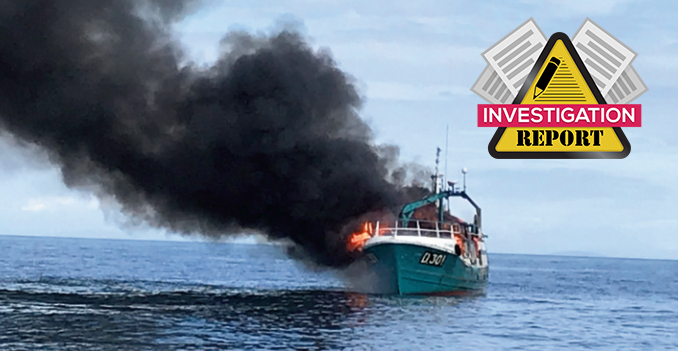 Ireland's Marine Casualty Investigation Board (MCIB) issued an investigation report on the fire and loss of MFV Suzanne II, east of Arklow, in May 2019. While the exact source of the fire is unknown, the report highlights that the quick response of the crew and their knowledge on when to abandon ship was key to their successful rescue.

On 2 May 2019, a fishing vessel was stopped 30 nautical miles east of Arklow and the crew were taking a break between fishing activities, when a crew member observed smoke coming from an engine room vent. The weather at the time was good.

The skipper went to investigate the source of the smoke and soon realised that there was a serious fire in the engine room.

He made an attempt to fight the fire but the level of smoke hampered any effort. The smoke and fire very quickly engulfed the vessel’s accommodation and wheel house.

A passing angling vessel sighted the smoke from the burning fishing vessel and proceeded in the direction to investigate.

Shortly after, the Irish Coast Guard rescue helicopter R117 arrived and lowered a paramedic to assess the crew from the fishing vessel.

The Skipper was airlifted to University Hospital Waterford from where he was later discharged, while the two other crew members were brought to Arklow Harbour.

A short time later, a tug boat with fire fighting capabilities arrived on-scene and commenced fighting the fire onboard the fishing vessel.

The fishing vessel continued to burn and eventually sank.

Not sounding could have been due to a recent defect or a longer standing one that would have been picked up if there was a monthly check, or damaged by the fire itself before it could sound. There is no record as to when the system was last tested or inspected as the vessel’s onboard records were lost in the incident. Regulations (S.I. 640 0f 2007) state the following: ‘131. (a) Inspections of the life-saving equipment and fire appliances shall be made at intervals of not more than one month.’ It is a requirement under the Regulations to carry out monthly inspections. The fire detection system functioning properly and sounding would have given the crew earlier warning of the fire and possibly have enabled a more effective effort at fighting the fire.

MCIB advised the Minister for Transport, Tourism and Sport to issue a Marine Notice reminding owners, skippers, officers and crews of fishing vessels of the following:

The Minister for Transport, Tourism and Sport should review Actions No. 9 and No. 29 of the Maritime Safety Strategy in relation to their implementation and specifically for pre-2007 fishing vessels in relation to the matters raised in this report. 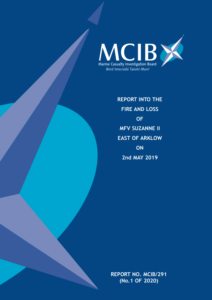