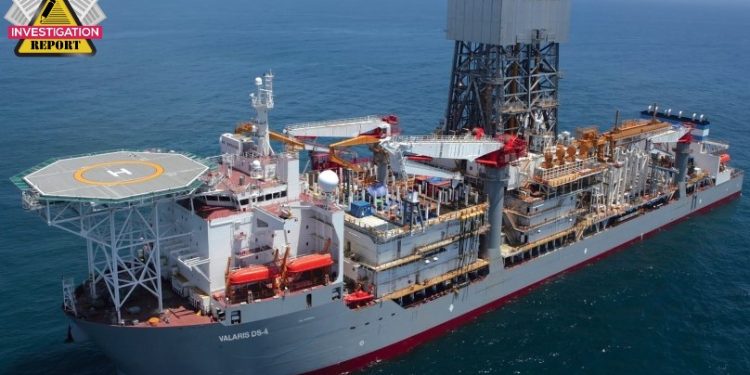 The Republic of the Marshall Islands Maritime Administrator published its investigation report into the mooring failure of Valaris DS-4 at Hunterston Jetty on the Clyde Estuary, Scotland during storm force winds on 2 February 2021.

Based on the Met Office inshore weather forecast issued at 0001 UTC on 2 February 2021, the forecast for the next 24 hours was for winds from the east to southeast between Beaufort Force 5-7 (17-33 kn) with periods of Beaufort Force 8 (34-40 kn). Forecasts issued later in the day were for easterly winds of similar force.

Based on VALARIS DS-4’s Noon Report for 2 February 2021, the observed winds were from the northeast at 25 kn with gusts between 45-53 kn. It was reported that the mooring lines and gangway were being checked due to the high gusts and that the drill ship was being prepared for the upcoming days of forecast high winds coming off the shore.

ENSCO DS-8’s Noon Report indicated that winds from the east at 30-35 kn with gusts of 40-50 kn had been recorded. It was also reported that the mooring lines were being adjusted as necessary and that diesel generators Nos. 3 and 4 were being preheated.

Based on the drill ships’ logs, the wind speed increased throughout the day. At 1600, VALARIS DS-4 reported northeast winds of 50 kn. The storm force winds continued, and at 1830, it was reported that the winds were 55 kn.

By 1720, ENSCO DS-8’s diesel generator No. 3 had been started and the drill ship’s power had been swapped from the portable deck generator.

At 1845, VALARIS DS-4’s Master, C/E, and ASD on duty reported hearing a noise that they thought sounded like the anchor chain. It was reported that the wind speed was about 70 kn.47 When the Master and ASD went on deck to investigate, they observed that several of the forward mooring lines had parted, and that the drill ship was moving away from the jetty.

VALARIS DS-4’s C/E went to the Engine Room to start a diesel generator and to prepare thruster No. 5.

About when VALARIS DS-4 started drifting away from the jetty, the Master made an announcement on the drill ship’s PA system directing all crewmembers to muster on the Bridge. The C/E left the Engine Room and went to the Bridge.

It was reported that the diesel generator the C/E had started stopped running a short time after he left the Engine Room.

Based on AIS information, at about 1923, the anchor held. By this time, VALARIS DS-4 had drifted approximately halfway across the channel between the jetty and Great Cumbrae Island, which was about 400 m to the west.

VALARIS DS-4 lost its moorings and was blown off the jetty when the logged wind was from the northeast at 55 kn. There are some indications that the speed may have actually been higher when the mooring lines started to part. All the drill ship’s mooring lines had parted within 30 minutes after the Master and other crewmembers reported hearing what they thought was the anchor chain at 1845 on 2 February 2021. The vessel drifted halfway across the channel between the jetty and Great Cumbrae Island before the anchor reset. The fact the anchor held likely prevented the drill ship from going aground on Great Cumbrae Island.

The C/E on board VALARIS DS-4 had started a diesel generator sometime after the noise, thought to be the anchor chain, was heard. He had not been able to shift power from the portable generator to the diesel generator and then place one or more of the drill ship’s thrusters online before the drill ship was blown off the jetty or while it was drifting across the channel.

It cannot be determined whether VALARIS DS-4 would have remained alongside the jetty if the crewmembers could have placed two thrusters online or if tugs had been pushing the drill ship alongside before 1845 on 2 February 2021.

It also cannot be determined whether ENSCO DS-8’s mooring lines would have kept the drill ship alongside the jetty without the use of thrusters or the assistance of the tugs pushing on the drill ship until the period of high winds from the northeast to east had abated by 6 February 2021.

Causal factors that contributed to this marine incident include:

Additional causal factors that may have contributed to this marine incident include:

Actions or events that reduced the adverse consequences of this marine incident include: