Maritime environmental crime: What to know 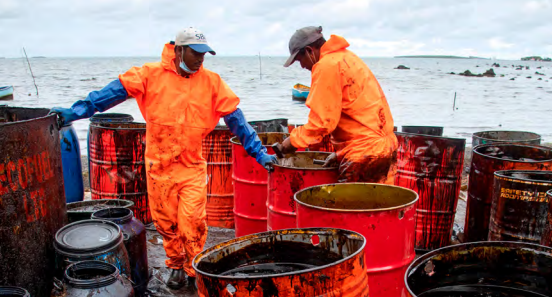 Credit: What We Know About Maritime Environmental Crime report

SafeSeas, Stable Seas and ONE EARTH FUTURE issued a report focusing on the environmental crimes within the maritime context.

Namely, maritime environmental crime refers to criminality which takes place in the sea and that has a harmful impact on the marine environment. While this encompasses many different crimes, three of the most common and most significant are maritime pollution, illegal dredging and seabed mining, and illegal, unregulated, and unreported (IUU) fishing.

The “What We Know About Maritime Environmental Crime” report defines maritime environmental crimes as comprising activities that cause significant harm to the marine environment, where humans are often only second order victims.

Conceptually, this definition encompasses all crimes that damage the marine environment significantly. These can range from small-scale activities such as recreational divers damaging coral reefs to large-scale industrial activities such as systemic illegal fishing.

The breadth of these potential crimes poses a challenge for the study of maritime environmental crime: they represent activities often captured under different legal regimes and having correspondingly broad research and data that speak to them available.

Overall, a clearer picture of maritime environmental crime as a whole will be beneficial to relevant agencies and law enforcement efforts to address these crimes, identify weaknesses in countermeasures, and address their root causes and intersections. In particular: