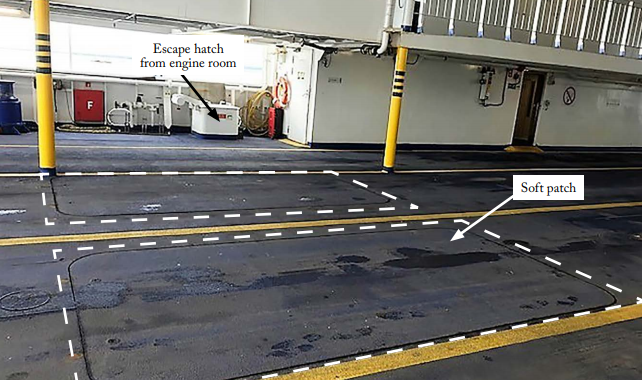 Lessons learned: Opening a soft patch should not be hard

A ro-ro passenger ferry with 40 persons on board was approaching its berth, when one of its four main propulsion engines exploded. The engine had been completely rebuilt and after 5 hours of operation failed. In its latest Safety Digest, UK MAIB said the engine failure resulted from dirt lodged between a main bearing and its journal.

The vessel’s engineer was standing next to the engine at the time and suffered serious burns to his hands and face. Fortunately, the engineer’s cotton boiler suit protected the rest of his body from the blast.

The engine’s crankcase shattered and fragments of the piston, gudgeon pin, connecting rod and big end bearing were ejected out of it during the explosion.

Plastic covers and other combustible material on the engine caught fire and the vessel’s fire alarm activated. The master was on the bridge and could see the fire on his CCTV monitor, so he activated the water mist fire suppression system in the engine space. This extinguished the fire within 2 minutes.

Less than 10 minutes after the explosion, the vessel was berthed and was met by the fire and ambulance services. The engineer was hospitalised and, although discharged within 7 days, he suffered severe post-traumatic stress disorder and was unable to return to work.

The vessel’s engine room had a large soft patch that could be removed to allow complete engines to be lifted out and onto the vessel’s car deck above.

However, removal of this soft patch was difficult because exhaust pipes and other large fittings had to be removed first.

To save the time needed to remove the soft patch, the vessel’s managers and service engineers had agreed that it would be easier to remove and replace engines by partially dismantling them so they could be shipped via a small emergency escape hatch from the engine room.

The engine maker’s investigation report suggested that the engine’s failure was probably a result of dirt lodged between a main bearing and its journal. This caused the bearing shells to turn and block the oil supply to the adjoining big end bearing, which then seized.

The most likely cause of this dirt ingress was through the oil channel on top of the engine block. This channel had been exposed during the transport and storage of the partly assembled engine block.