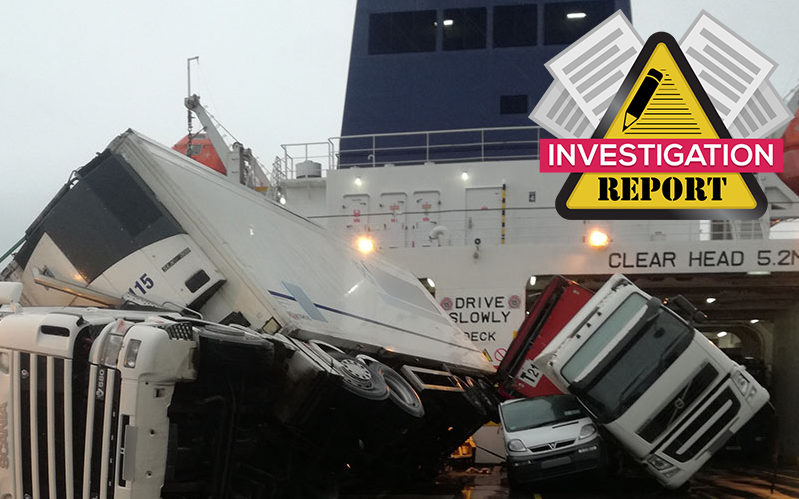 UK MAIB recently published its investigation report, focusing on a roll-on/roll-off (ro-ro) passenger vessel which rolled heavily due to very rough seas and winding conditions. Namely, ferry's cargo sifted and caused damage to the vehicles onboard.

As UK MAIB informs, it was at 0633 on Tuesday 18 December 2018 when the roll-on/roll-off (ro-ro) passenger ferry "European Causeway" was dealing with very heavy seas in its voyage from Larne, Northern Ireland to Cairnryan, Scotland.

During European Causeway’s departure from Larne, the wind was close to the company’s limits for departing port and the master experienced some difficulty manoeuvring the ship’s bow through the
wind. However, the ship was clear of the berth by 0546.

Sailing under rough weather conditions, the ro-ro ferry unexpectedly rolled heavily, causing several freight vehicles to shift and nine to topple over. This violent motion harmed 22 vehicles with some of them reported to have serious damages.

European Causeway experienced several large rolls. The wind was blowing between 40 and 50kts gusting to 60kts from the south-south-east, and the waves created by the wind were very large from the same direction. This was causing the ship to roll and yaw. At 0629 the the officer of the watch altered course to starboard and brought the ship onto a course of 060°. About 4 minutes later, European Causeway rolled 20° to starboard, then yawed violently to starboard, achieving a rate of turn in excess of 100° per minute. 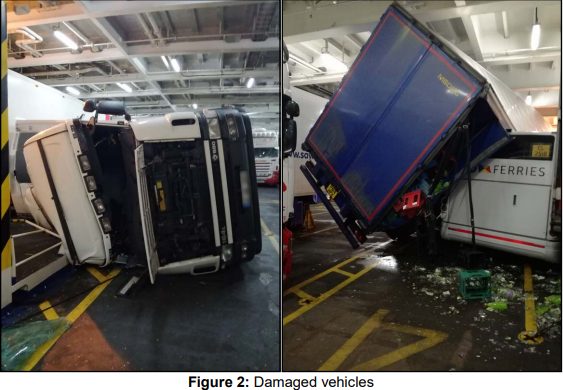 Six freight vehicle drivers had stayed in their cabs on the vehicle decks while experiencing the crossing and four were also found in cabs of vehicles which had toppled over. As a result, one driver ended up trapped and had to be freed by the emergency services when the ship arrived in Cairnryan.

With the night master’s decision to sail in heavy weather influenced by the decision of European Highlander’s more experienced master, the UK MAIB highlights that the accident occurred because the ferry rolled heavily in rough seas and its cargo had not been adequately secured.

Moreover, the rough weather conditions had been forecast and the accident would almost certainly have been avoided had European Causeway’s sailing been delayed until 0900 when the wind speed, as forecasted, dropped significantly. 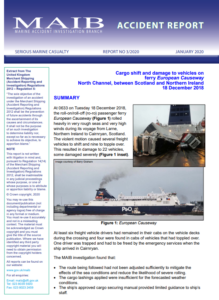