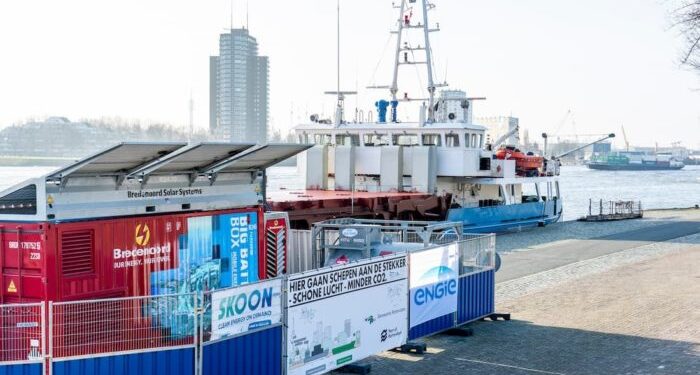 The port of Rotterdam informs that coasters taking part in the mobile shore power trial on Parkkade in Rotterdam were being supplied with free electricity, with the aim to encourage shipping companies take part in the trial.

In fact, according to a recent statement, the trial, the initial reactions of the trial were very positive.

The trial which started in December, is in partnership between the Municipality of Rotterdam and the Port of Rotterdam Authority.

It is added that mainly only vessels from Wilson shipping company have taken part so far. In total, five different mobile shore power systems will be tested over a five-month period.

The trial participants are

Currently, Engie, Bredenoord and Skoon’s hybrid system; a Big Battery Box, integrated with a motor generator on biofuel (HVO), is being tested.

During the Christmas period, the system used on Parkkade was extended by a week- giving more vessels the opportunity to connect.

According to the statement, the next system will be installed in the second half of next week.