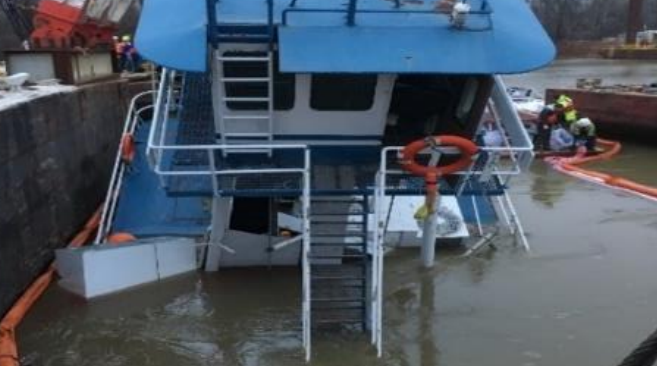 The NTSB issued an investigation report on the flooding and sinking of the towing vessel 'Nancy C' on Lower Mississippi River, near Dyersville, Tennessee, in March 2018. The investigation identified poor maintenance as key cause of the incident.

On 6 March 2018, about 1630 local time, the uninspected towing vessel Ms Nancy C was moving and positioning cargo barges while operating in Everett Lake, a tributary of the Mississippi River, when a deckhand discovered water in a void at the stern of the vessel.

While the captain and deckhand attempted to dewater the vessel, it sank in 15 feet of water.

Both crew members disembarked to a barge prior to the sinking without injury. Damage was estimated at $667,306.

The National Transportation Safety Board determines that the probable cause of the flooding and sinking of the towing vessel Ms Nancy C was inadequate maintenance of the vessel, resulting in corrosion and the loss of watertight integrity on the main deck, which allowed uncontrolled water ingress into the vessel’s stern voids.

The bottom and sides of the Ms Nancy C’s hull were found to be in fair condition after the accident, and thus the hull was not considered a likely entry point for water ingress.

Investigators discovered numerous potential sources of water ingress on the main deck, in the engine room, and in the voids.

All of these factors suggest that the covers on the main deck with accesses to the aft voids could not effectively be made watertight.

The shaft seals were typically leaking. Although the cofferdams would have contained the water to a confined area in the engine room, a hose carrying the discharge water from the port pump was leaking as it passed through the forward stern void.

Therefore, while water was being pumped out of the engine room, this hose would have leaked water into the forward stern void. Around the discharge hose where it penetrated the main deck, sealant had been poorly applied.

The sealant application, which had holes, was potentially an additional source of water ingress into the forward stern void.

The wastage, which extended into the overhead of the forward stern void, may have been the source of, or contributed to, the flooding of the space and the eventual sinking of the vessel.

Two penetrations found between the forward and aft stern voids rendered the bulkhead between the spaces non-watertight. Thus, water flooding one space would eventually flood the other space once the water level rose above the height of the penetrations.

The deckhand stated that the aft stern void was about three quarters full when he first opened the cover, which was a level above the penetrations.

Therefore, flooding of the forward stern void would have been ongoing. The flooding of the two stern voids would have increased stern trim and thereby decreased freeboard at the aft part of the vessel. On the day of the accident, waves as high as 3–4 feet with whitecaps were reported in the waterway where the Ms Nancy C was operating.

During normal operations, the vessel had a freeboard of about 2 feet. With the wave heights that day, it is likely that waves splashed against the port and starboard sides of the vessel as it was operating within the lake from approximately 0600 until the time of the accident at 1630.

Rain and water from the waves that puddled on the main deck could have then entered the voids through the loose access covers or wastage at the aft portion of the deckhouse. Because the voids of the towing vessel were not fitted with any high-water-level alarms, the crew was not warned of the onset of flooding.

In addition, the towboat had no fixed bilge system to remove water from the voids. Therefore, to dewater the spaces the crew had to remove the access covers to the voids and run portable pumps through the accesses.

By the time the deckhand realized that the towing vessel was taking on water by the stern, the amount of water entering the vessel had exceeded the capability of the two portable submersible electric pumps he rigged to dewater or mitigate the water ingress threat to the vessel.

This quantity of water increased the stern trim and decreased the aft freeboard to a point where water on the main deck was able to freely enter the three open access covers to the stern voids, as well as through several other loose access hatches and poorly fitted doubler plates intended to cover holes created by deckhouse corrosion.

As the vessel sank further, water would then have entered the engine room through wastage on the aft side of the deckhouse and over the sills of the open engine room doors. 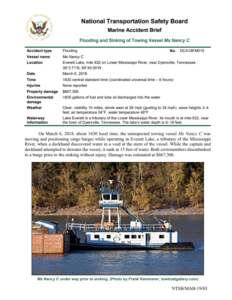