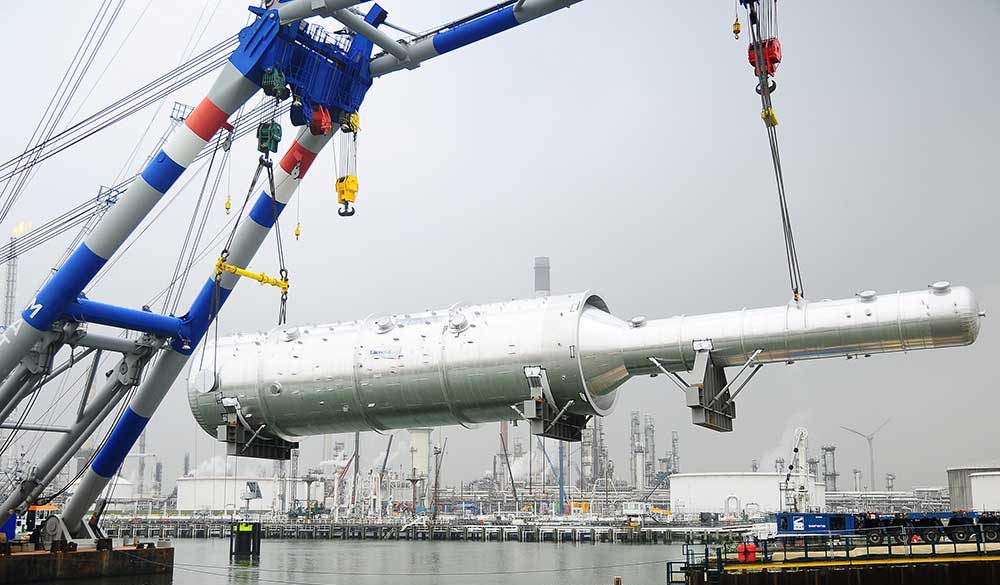 The first section of the new hydrocracker system has arrived in Rotterdam. The unit, a vacuum fractional distillation column some 50 metres tall and 9 metres wide, was manufactured in Belgium. The column was brought on shore at the ExxonMobil refinery in Botlek (port number 4090).

ExxonMobil’s investment of over USD 1 billion in a new hydrocracker system strengthens the position of its Rotterdam refinery within the European refining sector. The hydrocracker will be separating heavier products into cleaner, higher-grade end products such as base oils for lubricants and ultra-low-sulphur diesel fuel. The Rotterdam refinery is already one of the most energy-efficient refineries in Europe, and this investment will increase its energy efficiency even further – by a full five percent.

While the refinery has been producing low-sulphur diesel fuel for some time already, the new hydrocracker will significantly expand its production capacity in this category. In addition, this will be the first time ExxonMobil’s patented hydrocracking technology will be used to produce EHC™ Group II base oil at a European facility. Base oil is the key ingredient for the production of high-grade lubricating oils and greases. This allows the company to respond more effectively to the growing demand for cleaner transport fuels and to contribute to energy efficiency within the European transport sector. Besides constructing a new system and making adaptations to the existing hydrocracker unit, ExxonMobil will also be erecting six new lubricating oil tanks at the site.

The realisation of the new hydrocracker is also good news for local employment in Rotterdam’s port area. Every day, the refinery already offers work for some 650 employees, as well as a multitude of contractors and service providers. During the three-year construction period, the site will create new jobs for another 600 people on average, with a peak of up to 1,300 extra people in 2017. Once the new system has been taken into operation – probably in late 2018 – it will increase employment by another 40 structural positions or so, from 2019 on.