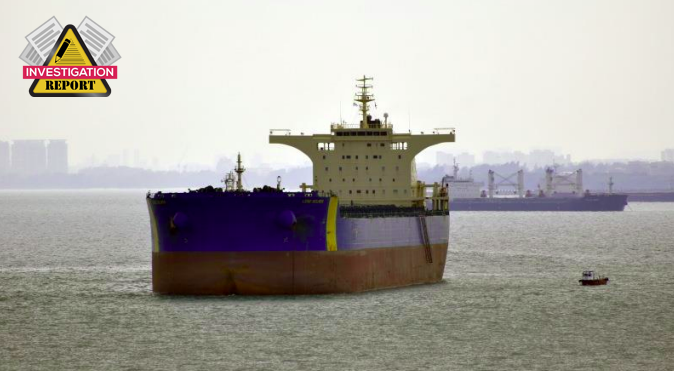 Belgium’s Federal Bureau for the Investigation of Maritime Accidents (FEBIMA) has issued an investigation report on a serious injury of a crew member onboard the bulk carrier MINERAL TEMSE, while at the South Atlantic Ocean, on 5 May 2020.

On May 5th 2020 around 20:18 hours, the engineer on duty received a “Separator N°1 fail” and a “Fuel oil bowl leak” alarm on the computer. Experience learned that this was a consequence of the contamination of the separator bow2 l as the discharge line of the separator got clogged.

The engineer informed the bridge that he was going to the engine room alone. He did not put on his coveralls and entered the engine room where he switched off separator N°1 and switched on separator N°2. Thereafter, he opened the plug of the inspection hole of the sludge discharge line in order to verify the condition.

Upon opening the plug, hot sludge oil gushed out of the inspection hole and covered the arms and legs of the engineer.

On 7 May 2020, the patient was evacuated from the vessel and transferred to a hospital in Cape Town, where the patient was diagnosed with 12% total body surface area mixed partial thickness burns, which were covered in sludge, involving both arms and legs.

Due to the cold flow characteristics of a certain blend of RMG 380 VLSFO, the separation of this fuel at +-40°C caused a blockade of the sludge discharge line, FEBIMA found.

The heating and pressurizing of the sludge in the discharge line in case of a complete blockade was not detected as a risk and so the inspection plug was opened very soon after the separator was switched off. Safety rules were not strictly followed outside the daily working hours in the engine room,

The victim was not accompanied when inspecting the sludge discharge line and he was not protecting his skin with the necessary PPE. The hot and sticky sludge came into direct contact with the skin of the victim, aggravating the consequences of this accident.

A more detailed analysis of the fuel regarding cold flow properties could have solved the separation problems with this blend of VLFSO.

This was not a standard job on board, but no further risk assessment or safety measures had been implemented to mitigate the risks associated to this job.