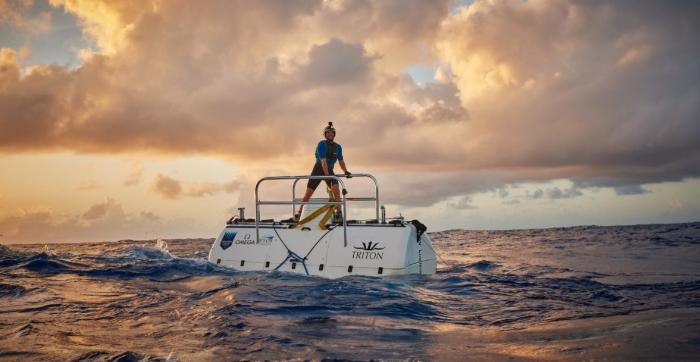 The Five Deeps Expedition has successfully dived to the bottom of one of the world’s five oceans. The team completed a mission to reach the deepest point on planet Earth: Challenger Deep within the Mariana Trench.

Victor Vescovo achieved a new deep-diving record and is the first human to make multiple dives, solo, to its hadal depths in the DSV Limiting Factor the world’s deepest diving, currently operational submarine.

The team measured and mapped the operating area with a Kongsberg EM124 sonar to pinpoint the desired dive sites. When at the bottom, Vescovo or the two-person sub team of pilot and specialist usually spent 3-4 hours on the bottom carrying out their survey and science missions.

On average, it required 3.5 hours for the submersible to reach the bottom of the Challenger Deep and 3.5 hours to ascend. The average total mission duration lasted from 11-12 hours including one hour combined for launch and recovery of the sub from the surface, well under the submersible’s required life support endurance of four days with two persons onboard.

The last visit to the bottom of Challenger Deep was made in 2012 by filmmaker and explorer James Cameron, who reached a depth of 10,908 meters on a dive in his submersible, the Deepsea Challenger.

Before Cameron’s dive, the first ever dive at Challenger Deep was made by the Trieste, a US Navy deep submergence bathyscape, in 1960 to 10,912 meters by Lieutenant Don Walsh and Swiss scientist Jacques Piccard. Both the Trieste and Deepsea Challenger only descended to the bottom of Challenger Deep once.