Decarbonisation:energy market scenarios and the impact on the shipping fleet

The shipping industry must consider multiple factors in moving towards decarbonisation, including the future demand for energy and the varied impact on short and deepsea fleet, writes Georgios Plevrakis, Director of Global Sustainability at ABS.

International shipping is facing the critical challenge of sustainability in response to global regulations for pollution prevention and protection of the aquatic environment. During the past 30 years, the enacted regulations were shaped in equal parts by responses to environmental incidents, disruptive periods of technological innovation and changing priorities among marine regulators, all of which were intended to improve operational efficiency, protect the environment or enhance workplace safety.

Each new regulatory development was preceded by long periods of industry investigation and discussion, and then followed by extensive efforts from the International Maritime Organization's (IMO) Marine Environmental Protection Committee (MEPC), to achieve the IMO’s strategic objectives through effective technical regulations. As the governing body on environment-related issues, the MEPC has long sought to objectively address the environmental concerns raised by its member States and partnering organizations.

In every instance — from the IMO’s mandate of the double hull oil tanker design and onwards — the conception, formulation and, especially, implementation of regulations would have been greatly aided by a comprehensive, living document that summarized the challenges and offered current solutions. As no such document existed, the maritime industry has often experienced long periods of uncertainty as it sought to interpret the new mandates, and harness technology to comply with those mandates.

As the industry adjusts to the current impact of the IMO’s 2020 sulfur cap — and prepares for the emerging regulatory changes in 2030 and 2050 — there is consensus that adapting to the new rules and challenges aimed at lowering its collective carbon footprint will be another period of uncertainty driven by disruptive environmental legislation, and defined by the innovative solutions which emerge.

ABS’ 2020 Setting the Course to Low-Carbon Shipping – Pathways to Sustainable Shipping outlook presents a comprehensive overview of the three potential fuel pathways for meeting the IMO’s goals to decarbonize the global fleet.

The current global energy landscape is centered on the use of hydrocarbon fuels to meet the energy demands of a developing world, but new and emerging emissions regulations are expected to drive significant changes to this landscape.

ABS collaborated with Maritime Strategies International (MSI) to create a global scenario for the future CO2 emissions from shipping, which takes into account the future variation of fuels used in vessels, as well as the decarbonization of different industrial sectors on which shipping depends. 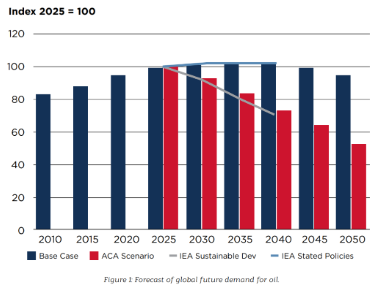 Two cases were considered: (i) a base scenario that follows the International Energy Agency’s (IEA) stated policies, and (ii) an Accelerated Climate Action (ACA) scenario that follows the IEA Sustainable Development actions. Both cases are informed by projections made or commissioned by the Intergovernmental Panel on Climate Change (IPCC) and have been projected to 2050. 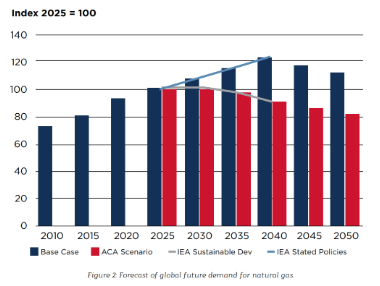 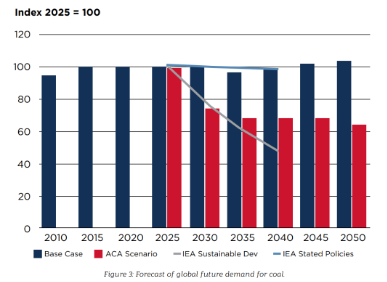 The graphs present the forecast of future demand for oil, natural gas, and coal, alongside the IEA projections contained in WEO 2019. The scenarios draw on the Stated Policies and Sustainable Development cases prepared by the IEA. The data have been indexed to 2025 to simplify the projection of the trends, as there were some differences in underlying historical data. In the case of oil and gas, the scenarios are closely aligned with the Stated Policies and Sustainable Development cases from the IEA. In the case of oil, under the ACA scenario, a rapid reduction in demand is forecasted to occur after 2030, with oil consumption falling from 42 BnT to 2.4 BnT by 2050.

For natural gas, the reduction in demand is less severe, since it is seen as a cleaner fuel than coal and oil, with less CO2 emissions per unit energy, less sulfur, and minimal particulate matter emissions from combustion. In the case of coal, global consumption is expected to decline, but its continued use in India and other emerging markets to generate electricity is expected to offset this decline on a global basis.

The wide range of vessels in the global fleet and their diverse trade routes create unique opportunities and challenges for shipowners as they set a course to decarbonization.

Both short and deep-sea vessels can be used for international trade and carry similar types of goods. However, the markets are distinctly different in terms of ability to adopt new technology, available resources and the complexity of their regulatory frameworks. These differences and commonalities will greatly influence the pathways that owners choose to reach the IMO greenhouse gas (GHG) reduction targets for 2030, 2050 and beyond.

About 60% of the European sea trade is handled by short-sea shipping across areas such as the Mediterranean, the North and Irish seas, the Baltic and throughout the continental countries served by rivers. Similar national and regional trade clusters exist in Africa, Asia, North and South America. Also, the short-sea trades tend to be governed by local and regional regulations, rather than global ones.

Ownership of short-sea vessels tends to be distributed among small to medium-sized companies that usually have limited resources to spend on new technology. Therefore, they tend to be supported by government initiatives that incentivize the adoption of any new technologies designed to benefit the public.

Examples of such initiatives are the European Union’s (EU) Connecting Europe Facility and Horizon 2020. The trade and regulatory landscape of short-sea vessels make them ideal candidates for early adoption of the new technologies that promote environmental sustainability. Some examples include low- and zero-carbon fuels such as liquefied natural gas (LNG), methanol and ammonia, as well as hybrid-electric power generation and propulsion systems.

Fuels such as methanol and ammonia have strong potential to lower the carbon footprint of shipping; but one of their challenges is their low energy content and the comparatively lower amount of energy they can store in the tanks of a ship. Short-sea shipping can accommodate the use of fuels with low energy content — such as methanol or ammonia — that may require more frequent bunkering.

Similar challenges arise from the use of batteries in hybrid-electric propulsion systems, which require frequent recharging when the vessel is periodically operated in fully electric mode. From a commercial perspective, short-sea shipping competes with ground transportation, so new technologies will need to satisfy the regulatory landscape to keep the sector environmentally and economically competitive.

Deep-sea vessels are used for intercontinental trade and are therefore subject to global regulations. The trend toward more stringent regional regulations, such as those seen in emissions control areas, may increase the complexity of maintaining the compliance of deep-sea vessels that tend to operate in multiple jurisdictions.

Also, from a commercial perspective, the large vessels used for deep-sea shipping tend to be designed for a single cargo, which is more subject to market fluctuations and supply chain risks. This uncertainty makes shipowners more cautious about adopting new technologies before they are operationally and economically proven.

Charterers considering further ways to differentiate themselves are increasingly likely to set stronger requirements for environmental performance and compliance with strict regional regulations. For these reasons, the technical development of large vessels requires a holistic approach to their design, so that efficient and sustainable operations can be optimized.

The adoption of low and zero-carbon fuels for large vessels is more challenging than for smaller ones. Using fuels with low energy content, such as methanol and ammonia, would require a significant redesign, not least because their fuel tanks would need to be expanded to store enough energy for longer deep-sea travel.

With capital expenses for redesigns and retrofits rising, the vessel’s employment prospects would need to justify this investment. However, certain types of vessels could be early adopters of alternative fuels if they carry those fuels as cargo. Aside from LNG carriers, liquefied petroleum gas (LPG) carriers also can utilize their cargo in dual-fuel engines, while reducing their carbon footprints.

In an effort to harmonize the global fleet with IMO goals and regulations, each vessel type faces a challenge to optimize the performance of its technical, financial and operational elements. Short-sea vessels can be early adopters of new fuels and technologies that may compromise their range at sea, but offer environmental benefits; however, deep-sea vessels will require more holistic approaches to adopting new fuels and technologies so that they can improve their operational efficiency.

The nature and trade route of each cargo will have a great influence on the fuels and new technologies adopted by each vessel as they pursue a pathway to a zero-carbon future.

Giorgos Plevrakis serves as ABS Manager of Business Development, specifically focused on helping the marine and offshore industries apply new and alternative sources of fuel. Plevrakis is based in Athens, Greece.
Prior to joining ABS, Plevrakis worked in a number of roles spanning power generation manufacturing to classification services. Previous roles include serving as Business Development Manager for RINA and Head of Power Plants and Turbomachinery and Marine New Buildings Manager for MAN Diesel & Turbo covering Greece, Cyprus and the Balkan Region.
Plevrakis holds an MEng in Mechanical Engineering from the National Technical University of Athens and an MBA from the Athens University of Economics and Business.