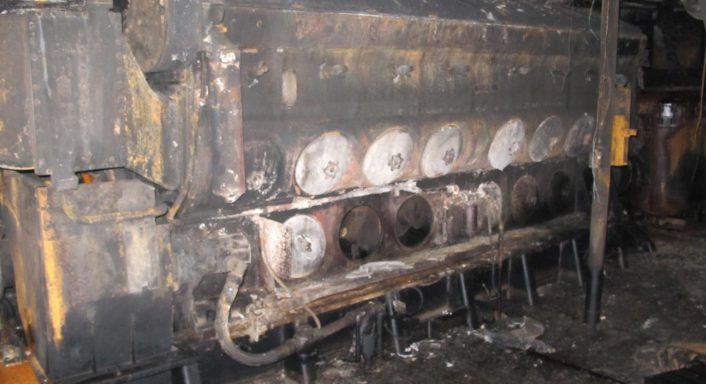 Postaccident photo of the inboard side of Leland Speakes’ port main engine at the lower engine room level / Credit: NTSB

The US  National Transportation Safety Board (NTSB) issued an investigation report on the engine room fire onboard the towing vessel 'Leland Speakes' on the Lower Mississippi River, in February 2018. A catastrophic failure and crankcase breach of the port main engine caused the fire.

On 21 February 2018, at 0740, the towing vessel 'Leland Speakes' was pushing 21 barges upbound on the Lower Mississippi River when a fire broke out in the engine room at mile 520.6, south of Greenville, Mississippi.

The nine crew members onboard tried to fight the fire but, unable to control it, abandoned the vessel to a skiff dispatched from a Good Samaritan towboat.

The abandoned tow drifted 11 miles downriver until another towing vessel pushed it into a sandbar.

The fire burned until later that evening before being extinguished by fire response teams and vessels.

None of the crew members were injured, and no environmental damage was reported.

The damage to the Leland Speakes was estimated at $4.5–5 million.

Because the initial location of the fire was in the lower engine room, its immediate intensity and rapid spread likely resulted in damage to the remote-start button electrical wiring for the tow’s single fire pump.

As a result, the pump was rendered inoperative due to its location near the initial fire and the crewmembers were left without their primary means to extinguish the fire―water hoses.

The engine room contained two semi-portable dry chemical extinguishers to combat engine room fires, but again, due to the fire’s initial intensity and large amount of smoke they were not accessible. Regardless, they were likely insufficient to extinguish the fire given its size and the large amount of available fuel to sustain it.

Thus, without propulsion, steering, or a means to effectively fight the fire, the captain’s decision to evacuate the vessel was reasonable. The engineer shut down only the portside ventilation fans in the engine room, leaving the starboard-side fans running to provide the captain an engine to maneuver with.

Nevertheless, even if all the fans had been shut down, the engine room inlets and exhaust vents would have remained open, as the vessel design did not incorporate any means, such as dampers, to effectively close off air supply to the engine room.

The exterior doors and windows were regularly left open to cool the engine room, as the crew stated they did so due to the heat generated by the engines.

This practice, although found on other inland towboat operations, indicates that the ventilation system for the engine room was under-designed for the ambient conditions Leland Speakes operated in for its engine load. However, even if the crew shut the windows, given that they were residential type, they would have likely failed in the large fire.

Furthermore, the small confines of the engine room and the location of firefighting equipment inside that space demonstrate a risk to crews fighting engine room fires. Had the fire pump operated, the sole means to try to control and extinguish the fire would have been to place hoses through an engine room door or window.

On smaller vessels, such as towboats, the risk to crews fighting engine room fires has led to the development of designs that incorporate both a means for shutting down ventilation to the engine room and a fire suppression system, such as a fixed CO2 system, to extinguish the fire without requiring crews to enter the space. 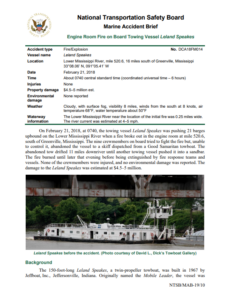