The following collision involved a modern Norwegian frigate (delivered on 2009), a new built Tanker (Delivered to Company on May 2017) and a fully equipped VTS station and occurred under good conditions, highlights once again the need for more efforts toward improving Bridge Resource Management and addressing best practices for enhanced safety of navigation.

The incident at a glance

On 8th November of 2018, the Norwegian Frigate HNOMS HELGE INGSTAD involved in a collision accident with  Oil tanker SOLA TS outside Sture terminal in Hjeltefjord in Hordaland county, Norway.  As a result, frigate partially sunk along shoreline, with Oil tanker to sustain only minor damages.

Frigate and tanker collided in early hours of 8 November 2018. Frigate had 137 persons on board with a mix of conscripts and permanent crew. A total of seven watchstanding personnel were present on the bridge, including two trainees. Tanker had a total of 24 persons on board. The bridge was manned by four persons, including pilot.

Frigate sailed south at a speed of approximately 17–18 knots with the AIS in passive mode, i.e. no transmission of AIS-signal. Frigate’s bridge team had notified Local VTS station of entering the area and followed the reported voyage. Tanker had been loaded with crude oil at Sture Terminal, and had also notified VTS station of departure from the terminal. Tanker exhibited navigation lights. In addition some of deck lights were turned on to light up the deck for crew who were securing equipment.

In advance of collision, VTS Station had not followed frigate’s passage south through fjord. Crew and pilot on Tanker had observed Frigate and tried to warn of the danger and prevent collision. Crew on Frigate did not realize that they were on collision course until it was too late.

At 04:01, Frigate collided with Tanker. First point of impact was Tanker’s’ starboard anchor and area just in front of frigate’s starboard torpedo magazine. Frigate suffered extensive damage along starboard side. Seven crew members sustained minor physical injuries. Tanker received minor damages and none of the crew were injured. Marine gas oil leaked out into fjord. Institute of Marine Research has ascertained the effect of oil spill had little impact on marine environment.

Frigate conduced a passage plan through Hjeltefjord (marked with a black circle on Image 1) on map and voyage was being used for crew training in inshore navigation. AIS was mostly in receive mode (receive only, no transmission), and appropriate navigation lights were on.  Bridge Manning of frigate was a typical warship’s manning for transit (including some trainees).

Tanker had just departed from a terminal and was under pilotage (Pilot had the con). Apart from the Pilot, 3 crew members were in wheelhouse. Master, as overall in charge, Officer of the Watch (to support Master with Systems’ Monitoring e.g. Radars, ECDIS etc), and a helmsman.

However due to some reasons, VTS was not in position to provide information. As the closing speed was high (Frigate 17 knots, Tanker 7knots), not many actions could have been made to avoid collision. 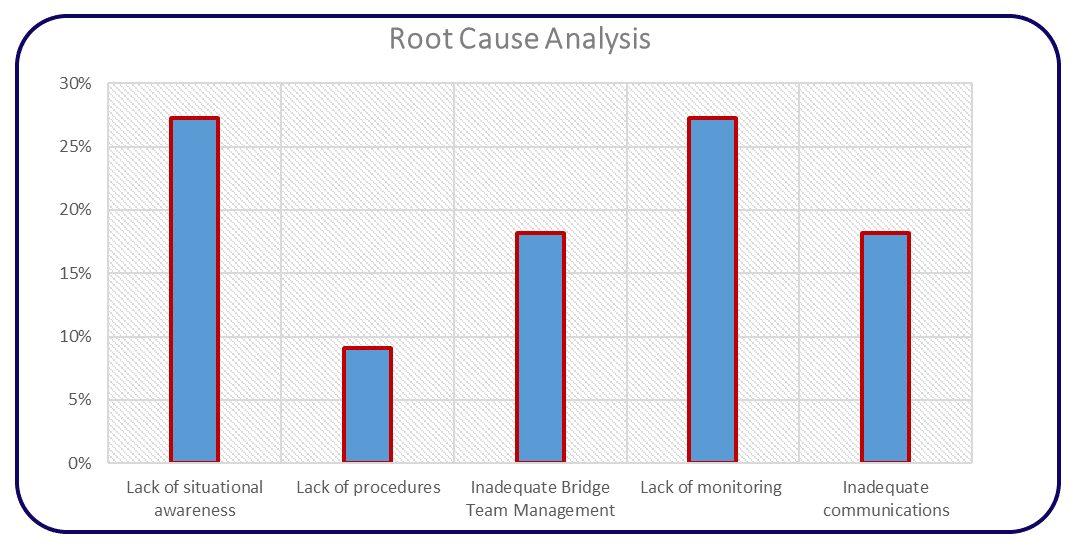