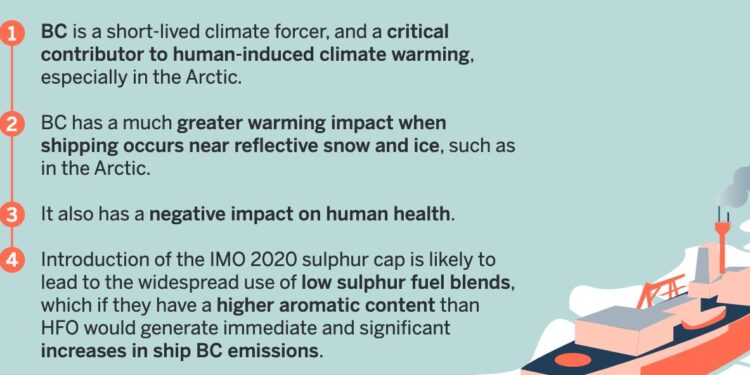 Responding to reports from the US National Snow and Ice Data Center that summer ice has reached its 12th lowest ever extent, Clean Arctic Alliance called for urgent cuts to black carbon emission from shipping, ahead of the International Maritime Organization meeting MEPC 77 in November.

“Going by the NSIDC’s preliminary assessment, it looks like this year’s Arctic summer sea ice minimum will be one of the highest in the past decade, however the volume of multi-year ice is one of the lowest recorded. Around 80,600km2 of sea ice is being lost annually (equivalent to the size of South Carolina or Austria). Dramatic and urgent reductions in short-term climate forcers including black carbon remain essential to slow the melt down”, said Dr Sian Prior, Lead Advisor to the Clean Arctic Alliance.

“The state of Arctic Sea ice, the cascading impacts of climate change, along with the IPCC findings make the levels of climate ambition and timelines currently on the table for shipping at the International Maritime Organization (IMO) totally inadequate. It is imperative that measures due for adoption at the IMO in November be strengthened to ensure they drive fast deep cuts in CO2 and black carbon emissions from ships, especially those visiting the Arctic”, said Prior.

“Black carbon is a short-lived climate forcer remaining in the atmosphere for days or weeks before settling out onto the land or sea. Cutting black carbon emissions, especially its deposition onto Arctic snow and ice, will halt the warming impact virtually immediately.”