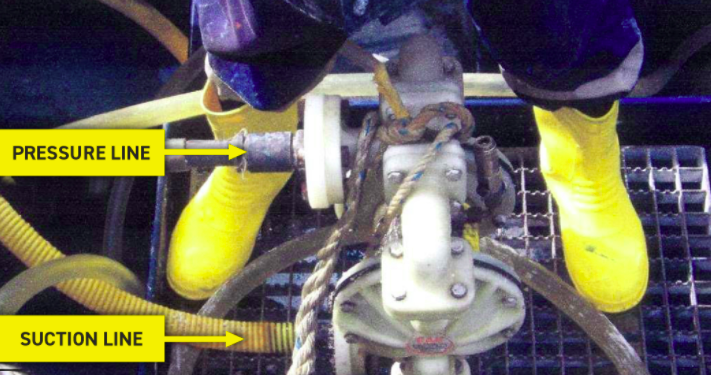 Pump used on the day of the incident / Credit: BSU

The third officer (3/o) of a chemical tanker was splashed with caustic soda while preparing the ship’s cargo tanks ready for loading caustic soda. As part of its BSafe campaign, Britannia Club describes the case and shares key lessons learned.

A 12,162 GT chemical tanker was anchored at a roadstead in the lower reaches of a river and was in ballast condition. The crew were preparing its tanks for loading a cargo of 50% sodium hydroxide solution (caustic soda) in ten of the ship’s 12 cargo tanks, having previously carried RBD (refined, bleached, deodorized) palm stearin in six of the tanks, including tank no.1 port, and crude palm oil, coconut oil, and biodiesel in the other tanks. The tanker had only been operating for four months and the same crew had been onboard throughout this period.

In the days preceding the incident, the crew had made various attempts to prepare the ship’s tanks for the new cargo by cleaning the residues of the previous cargoes. However, each time the tank inspector, who was attending on behalf of the chemical company supplying the caustic soda, rejected the tanks following inspection due to the presence of cargo residues. The first tank pre-inspection had been carried out on the night of 24 July.

However, it was not until the morning of 29 July, following a successful tank inspection, that a cargo sample of caustic soda could be loaded and circulated through the other tanks in which the cargo was to be loaded. After completing a circulation, a specimen of the cargo sample was taken to check its level of contamination and water content. The specimen came back as being contaminated and the tanks were again rejected by the tank inspector.

Early on 30 July, the ship relocated back to the roadstead and on 1 August the crew prepared to clean the cargo tanks one more time. This required two crew members to enter tank no. 1 port and remove the residues of the caustic soda that had been used as a cargo sample using a mobile pump. A polypropylene pneumatic driven pump with a pumping capacity of 520 l/min at a maximum working pressure of 8 bar was prepared. Meanwhile, a tank cleaning team consisting of the 3/O and an ordinary seaman (O/S) donned PPE consisting of a cotton overall, a rubberized jacket, safety boots, protective gloves, goggles and a safety helmet and prepared to enter the tank.

While the caustic soda was being pumped out from inside the tank, the hose clamp securing the pressure hose to the pump parted and caustic soda was released into the cargo tank. This resulted in the 3/O being spattered with caustic soda, with a small quantity entering his eyes. Alerted by the 3/O’s screams, the O/S requested assistance using his portable radio. The 3/O was safely escorted out of the cargo tank and onto the deck where the master and the bosun took him to his cabin where they conducted first aid by rinsing his eyes with water, while shore assistance was requested.

The local Rescue Coordination Centre was alerted and the injured 3/O was taken to a nearby town by a rescue lifeboat and then flown to hospital by helicopter. He was treated at the hospital for chemical burns and was released after ten days. It is unknown whether the injuries sustained have caused any permanent disabilities. 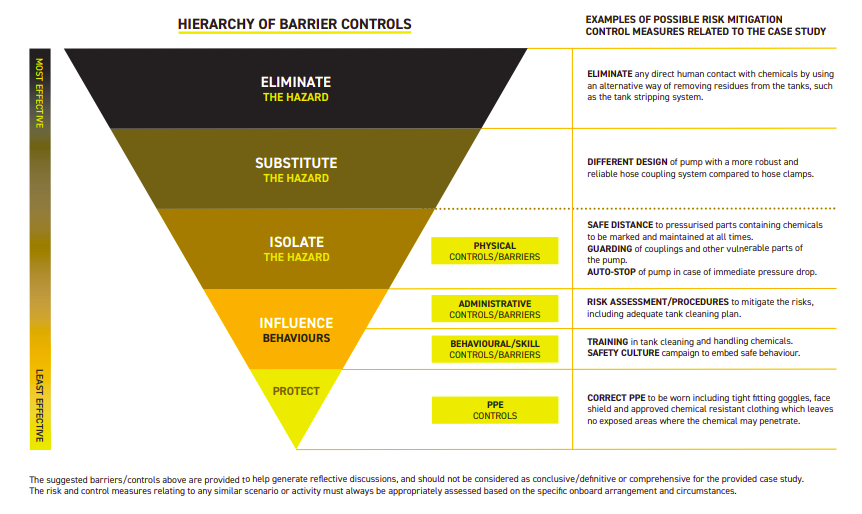 The Club identified the following lessons learned based on the information available in the investigation report: