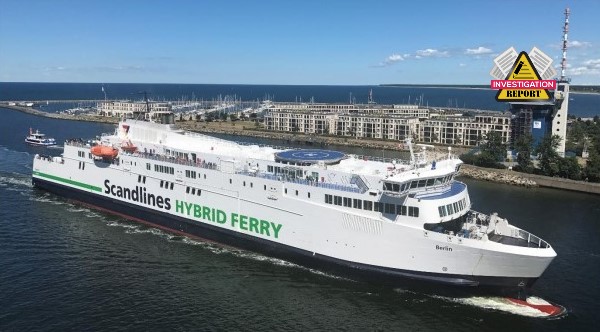 The German Bureau of Maritime Casualty Investigation (BSU) published its report on the German flagged ferry BERLIN, which while was en route to the port of Rostock, a fire broke out in the main engine room, on 13 August 2020.

On 13 August 2020, the German flagged ferry BERLIN was en route to the port of Rostock as usual. At about 0245, when she was in the approach fairway about 2.6 nm off the sea channel, alarms sounded in the engine control room (ECR) and in the workshop. The IMAC Alarm, “gear oil sump level low” sounded first.

Ship mechanic 1 (SM 1) acknowledged the alarm in the workshop and proceeded to the source of the alarm at main engines (ME) 1 and 2 (the two main engines that drive the controllable pitch propeller together with ME 3, via a common reduction gearbox). There he detected a leakage from a double nipple on top of the gearbox (from the pressure gauge connection).

Ship mechanic 2 (SM 2) meanwhile reached the scene via Deck 1. He saw flames and smoke in the area of ME 2 turbocharger.

At 14:46, the smoke detector in the main engine room went off. However, the object protection system did not trigger automatically, as this only happens when two detectors detect an alarm.

At 1450, SM 2 stopped main engine 2 locally. The technical officer (TO) in the engine control room stopped ME 1, ME 2, and ME 3, as well as the electric gear oil pump. From the bridge, the gearbox was disengaged with an emergency stop.

At 1451 the general alarm was sounded from the bridge, and mustering of the crew and passengers began. At the same time, the bridge triggered the quick-closing valves of the fuel supply for ME 1, 2 and 3.

At 1453, an announcement was made to inform the passengers. A distress call was sent to Warnemünde Vessel Traffic Services via VHF, in which the intention to leave the sea channel in a westerly direction was declared. This was carried out immediately. Furthermore, they stated that the fire was being fought and that no assistance was required. The ship would continue to be fully manoeuvrable with its electric drive.

#1 Technology: Due to material fatigue, the double nipple of a pressure gauge on the pipe of a gear oil pipe broke. This resulted in gear oil spraying far into the engine room and onto hot surfaces, where it ignited. At the same time, this caused the oil pressure in the system to drop.

Following the resulting alarm “oil level gearbox low “, a ship mechanic proceeded to the scene immediately from Deck 2 and detected a heavy oil leak there. At about the same time, another ship mechanic reached the area from Deck 1 and saw fire and smoke in the vicinity of the turbocharger of ME 2. He immediately activated the emergency stop for ME 2. At the same time, a smoke detector in this area detected a fire in ER 2. The ship mechanic informed the bridge that a fire had broken out.

#2 Extinguishing measures: Up to that point, all measures and procedures were faultless and complied with the normal routine of an engine room watch. The further measures and actions were successful, did not comply with established procedures, however, and were self-endangering.

Due to the still very good visibility conditions in the ER, the fire was sporadically fought with hand fire extinguishers (foam). Although it became obvious very quickly that either the effectiveness of the extinguishing agent or the accessibility of the fire scene (with approx. 1.5 m throwing range) was insufficient, this procedure was repeated by the ship mechanics several times.

With an average flame height of 2 – 3 m in the area of the turbocharger and the exhaust pipe, this was no longer a small incipient fire, so that the operation of a hand fire extinguisher was no longer reasonable. This factor was underestimated.

The cause was determined to be material fatigue of a pressure gauge pipe that could not have been foreseen. It had broken, releasing a jet of gear oil onto insufficiently insulated engine parts, where it predictably ignited.

#1 Extinguishing measures: The Scandlines crews have above-average training levels in practical firefighting and also tactics. This is achieved through regular safety drills on board and large-scale exercises with ship firefighting units of the professional fire department, as well as through regular participation in so-called “Live Fire Trainings”. These „Live Fire Trainings“ were developed years ago for cruise vessels and ferries and go far beyond the required training according to STCW. All kinds of scenarios are trained under realistic conditions, such as engine room fires, cabin fires, or fires in vehicle decks.

However, due to the extraordinarily favourable circumstances in this case, the engine room watch was not aware of possible negative outcomes.

In addition to high-quality STCW training, Advanced Fire Fighting (AFF) refresher courses in defensive fire protection should also be introduced for crew members at ratings level, if they are members of fire protection squads, not only for licensed officers.

#2 Legal framework: In the course of the investigation, it became apparent that uniform standards must be developed that specify periodic and repair-dependent inspections of the “hot surface situation” in terms of fire prevention for engines and machinery.