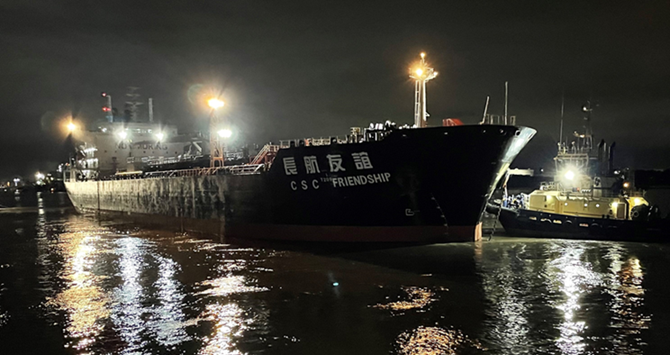 The Australian Transport Safety Bureau has released a preliminary report from its on-going investigation into the breakaway and grounding of a product tanker in the Port of Brisbane during flooding on 27 February 2022.

The Hong Kong-flagged product tanker CSC Friendship was alongside the Ampol Products Wharf in Brisbane, loaded with 25,000 tonnes of diesel oil and 7,000 tonnes of gasoline for a voyage to Adelaide, on the evening of 27 February.

A low-pressure system and associated rain and wind was impacting the greater Brisbane area, resulting in significant flooding of the Brisbane River.

At about 2250, during an increased ebb tidal flow in the river, one of the ship’s stern lines parted suddenly. This increased the load on the 13 remaining mooring lines which, over the following 90 minutes, also failed.

During this time, the ship’s crew used the main engine and an anchor in an attempt to arrest the ship’s movement, and a number of harbour tugs attended to assist.

Despite these efforts, the ship broke away from the berth at about 0028 on 28 February, was swept downstream, and grounded to the east of Clara Rock beacon at Lytton Rocks Reach.

About half an hour later, a harbour pilot arrived by launch and boarded the grounded ship via the ship’s pilot ladder.

The pilot quickly established the ship was aground with the port quarter on the bank, bow slightly in the channel, and head down river.

Over the next four hours, the pilot attended the ship and, working with the ship’s crew and tugs, re-floated it at 0530. During the re-floating efforts, the ship grounded a second and third time.

About 0105, the pilot arrived by launch and boarded the grounded vessel via the ship’s pilot ladder. The pilot quickly established the vessel was aground with the port quarter on the bank, bow slightly in the channel and head down river. The pilot estimated the river current was running at 5 or 6 knots from the ship’s starboard quarter, effectively pushing the ship continuously onto the bank. Further, the port anchor had 6 shackles payed out. The chain had fouled over the ship’s bulb, around the stem, then into the water on the starboard side and back towards the wharf.

The pilot conducted a briefing with the ship and tug masters. Then, at about 0150, the pilot attempted to free the vessel using a combination of 2 tugs pulling the ship’s stern to starboard, heaving in on the anchor, and engaging astern propulsion from the ship’s engine. By 0210 it became obvious the vessel had not moved and remained grounded at Lytton Rocks Reach. The pilot stopped engines and stood down the tugs, requesting one remain on station while the others managed their crew’s fatigue ready for another attempt at high tide.

At 0500, the pilot estimated the ebb current flow to have dropped to about 3 or 4 knots and requested the tugs to make fast to the ship to attempt another move. The port anchor remained a concern for the pilot. After discussion with the master, the pilot agreed to attempt to retrieve the anchor if possible, without compromising the re-floating attempt. Ten minutes later, the pilot instructed both tugs aft to lift off using full power and move out to starboard to bring the ship’s stern towards the channel.

The stern of the ship immediately started to move into the channel and the pilot instructed the master to commence heaving in the anchor. The attempt to weigh anchor caused the bow of the ship to swing sharply to starboard and the stern to swing back to port, which resulted in the ship running aground again by the port quarter.

The bow’s movement continued, and the pilot then ordered the ship’s crew to stop weighing anchor and ordered the tug forward to pull with full power to arrest the bow swinging to starboard. The bow was successfully checked. However, because the current was now full on the ship’s port quarter, the stern sheered rapidly starboard towards the Ampol berth and ran aground on the starboard quarter

The pilot decided to cease any further attempts to retrieve the anchor and instructed the crew to release the bitter end and let the anchor go. They then ordered hard starboard, and full ahead while the 2 aft tugs pulled full to port. The ship came free of the bank on the starboard side of the channel and quickly moved off towards Lytton Rocks Reach, clearing Clara Rock (Figure 4, bottom right). Once underway the pilot was able to gain control of the ship with rudder alone and a short time later instructed the forward tug to lay flat and both aft tugs to stream dead astern. The anchor cleared away from the bitter end and exited the hawse pipe soon thereafter, with a bang.

The ship transited downstream without further incident. Once it was clear of Pelican Banks Reach and into the Fisherman Island swing basin, the pilot released 2 tugs, retaining only the centre lead aft tug until clearing the entrance beacon. CSC Friendship anchored at the Ship-to-Ship transfer anchorage (STS1) at about 0645.

Crew inspections, internal tank soundings and an underwater hull survey conducted on 3 March confirmed some shell plate damage, including buckling and medium to heavy abrasion of the hull. No hull penetration or cracking of plate or welds was found. Although the steering gear was in working order, a rudder angle of only 25° to port could be achieved instead of the full 35°. No injuries or pollution resulted from the grounding.

On receipt of a conditional safety construction certificate from China Classification Society (CCS), CSC Friendship was permitted to sail to Botany Bay, to discharge cargo, then directly to China for dry dock and repair.

The investigation is continuing and will include the following subject areas:

At the time of the grounding, the ship was owned by Fu Ning Marine Pte Ltd, managed by Nanjing Tanker Corporation and classed with China Classification Society (CCS). CSC Friendship had a Chinese crew of 25 personnel, including the master, and the working language on board was Chinese.

The Ampol Products Wharf was wholly owned by Ampol Limited and is located on the Brisbane River adjacent to the Lytton Refinery within the Port of Brisbane.