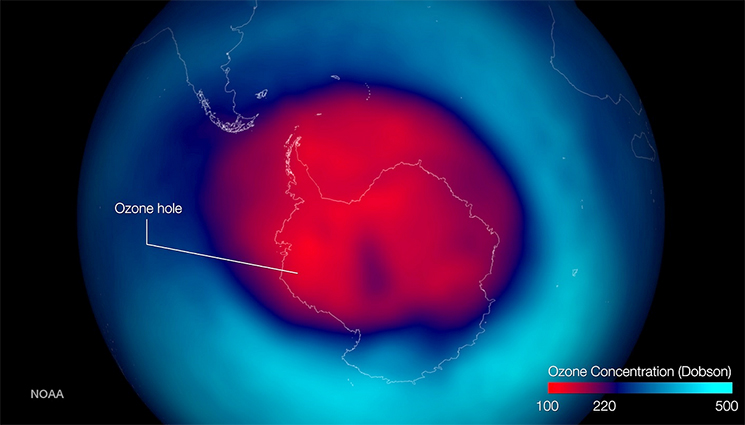 In comparison, the largest ozone hole area recorded to date on a single day was on September 9, 2000, at 11.5 million square miles (29.9 million square kilometers). The ozone layer helps shield life on Earth from potentially harmful ultraviolet (UV) radiation that can cause skin cancer, damage plants and phytoplankton—the top of the oceanic food chain.

“The good news is that our measurements show less thinning of the ozone over the South Pole during the past three years,” said Bryan Johnson, a researcher with NOAA’s Earth System Research Laboratory in Boulder, Colorado. “However, the rate at which ozone thins during the month of September has remained about the same for the past two decades. A decrease in this rate will be an important sign of recovery.”

South Pole balloon-borne ozonesonde observations measured a minimum amount of 120 Dobson Units of ozone this year on September 29. Ozonesonde measurements of 250 Dobson Units in August are common just before the rapid destruction of ozone in September.  NOAA releases about 50-60 ozonesonde balloons per year since 1986 to measure the ozone layer at the South Pole.  Over the last 50 years satellite and ground-based records over Antarctica show ozone column amounts ranging from 100 to 400 Dobson units, which translates to about 1 millimeter (1/25 inch) to 4 millimeters (1/6 inch) of ozone in a layer if all of the ozone were brought down to the surface.

The Antarctic ozone hole began making a yearly appearance in the early 1980s, grew in size through the 1980s and has been consistently large since 1990, with annual variability attributed to stratospheric meteorological conditions over Antarctica. The hole is caused by chlorine released by manmade chemicals called chlorofluorocarbons or CFCs that were extensively used as aerosol sprays and in refrigerators.

These chlorine compounds lead to ozone depletion in certain upper atmospheric conditions. These conditions are at their peak over Antarctica as the dark cold winter gives way to the Antarctic spring in September. Just before the sun rises over Antarctica, extremely cold temperatures in the stratosphere allow for polar stratospheric clouds to form, a rare event in the earth’s atmosphere, but a regular occurrence in the winter over Antarctica. Chemical reactions on the cloud particles convert stable chlorine compounds into unstable or reactive forms. The sun light triggers reactive chlorine and ozone chemistry that depletes ozone in a large volume over Antarctica.

Scientists first made the connection that CFCs were depleting the earth’s protective layer in 1974. In 1987, 46 nations, including the U.S., signed the Montreal Protocol, a landmark agreement to phase out production of ozone-depleting chemicals. The slow recovery of this ozone layer is one of the great international efforts to restore the planet from manmade damage.

The 2014 level of ozone depleting substances over Antarctica has declined about 9 percent below the 2000 recorded maximum. But CFCs can remain in the atmosphere for more than 50 years. The ozone layer above Antarctica likely will not return to its 1980 state until about 2070, said Paul Newman, chief scientist for atmospheres at NASA’s Goddard Space Flight Center in Greenbelt, Maryland. Climate change may also affect the rate of ozone recovery by cooling the stratosphere, which can slow Antarctic ozone recovery.

“Year-to-year weather variability significantly impacts Antarctica ozone because warmer stratospheric temperatures can reduce ozone depletion,” said Paul A. Newman, chief scientist for atmospheres at NASA's Goddard Space Flight Center in Greenbelt, Maryland. “The ozone hole area is smaller than what we saw in the late-1990s and early 2000s, and we know that chorine levels are decreasing. However, we are still uncertain about whether a long-term Antarctic stratospheric temperature warming might be reducing this ozone depletion.”

NOAA and NASA also use data taken by the Ozone Mapping Profiler Suite (OMPS) instrument on board the Suomi-National Polar-Orbiting Partnership satellite to monitor the earth’s ozone layer. This instrument replaced the NOAA Solar Backscatter UltraViolet/2 ozone profiler and NASA Total Ozone Mapping Spectrometer.  NOAA’s Climate Prediction Center has been monitoring the Earth’s ozone layer for over 30 years, analyzing ozone concentration at various altitudes in the ozone layer as well as the total column amount of ozone. These measurements provide a three dimensional perspective of the ozone layer. This provides the means to monitor the ozone layer’s health and to make sure it is on the road to recovery.

In the outbreak, I was outspoken with you propecia before and after has changed my being. It has become much more fun, and now I have to run. Just as it is improbable to sit.