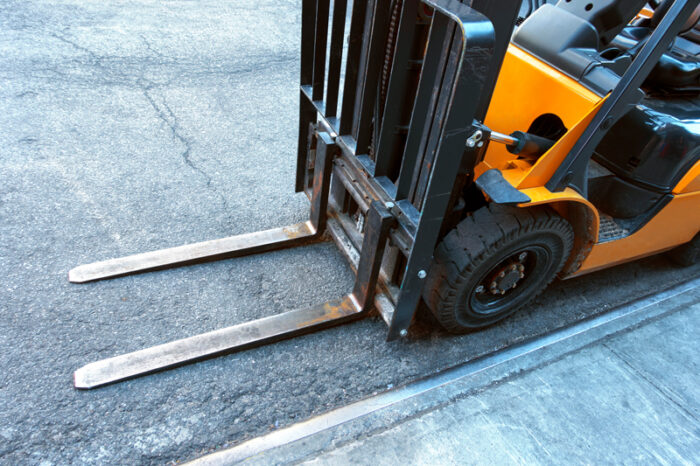 AB injured during maintenance job after no review and risk assessment

In August's monthly safety scenario, the Swedish Club discusses of an incident where three crew members attempted to conduct an inspection on the vessel's forklift truck that had been stuck, that led to a crew member being injured.

As the left fork on the vessel's forklift truck had been stuck, two ABs and an engineer conducted an inspection. All crew members during the operation were wearing the correct PPE, hard hats, boiler suits, high visibility vests and boots with steel caps.

After consulting a blueprint and the locking pin arrangement for the fork, they decided that the first try would be to free the pin by trying to lift the fork, allowing a screwdriver to be placed in the pinhole and lifting it clear of the locked position.

They planned to slide the fork clear of the carriage on the outer side and then repair the pin once the fork had been removed. This plan required a safety stop to be removed to allow the fork to be slid off. This safety stop was subsequently removed.

Following, the crew discussed on how to approach the job. After several failed attempts, they decided that the forks should be rotated so there would be better access to the locking pin. This was done by having the weight of the fork hanging upside down to provide a gap big enough for a screwdriver to be placed in the pinhole.

The engineer left for the workshop to get some tools.

The two remaining ABs continued to try to find a solution. AB1 started the forklift and rotated the forks with instructions from AB2. The aim was to get the forks in a level position to prevent them from sliding off when the pin had been freed. The engine was switched off after the forks had been rotated and AB1 joined AB2 by the forks.

AB1 realised that the good fork was in a position which was preventing easy access to the broken pin, so they started to release the securing pin for the working fork to pull it out of the way. At this point AB2 held the fork in position with one hand as there were no other securing arrangement. With the other hand he tried to pull the pin out. While he was doing this, he slipped and fell onto the deck. This caused the fork to come lose and hit his hard hat and his hand, it also hit AB1’s foot just above the steel cap on his boot. AB1 called for help on the UHF.

As the vessel remained in port, an ambulance quickly arrived at the scene and transmitted the injured crew to hospital. It is stated that AB1's foot was severely injured, and he could not return to work.

The Club highlights that

When AB2 was moving the fork, it slid past the groove. This caused the fork to come off the carriage. The manual for the forklift was never reviewed and no risk assessment was completed for the job.