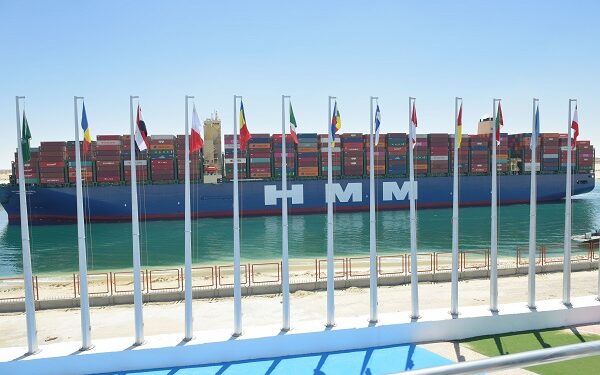 The world’s largest container vessel, HMM Algeciras transited the Suez Canal among the south convoy. The record-breaking vessel has a capacity of 23,964 TEUs.

To ensure safe transit, the Suez Canal assigned a number of SCA pilots, provided the required navigation aids, such as escort tug boats, and real-time monitoring, as well as various traffic control stations.

According to Admiral Osama Rabie, Chairman of the Suez Canal Authority (SCA), the canal has increased its efficiency, remaining the best option for mega vessels.

SCA is noticing the rapidly developing maritime transport industry and has several projects on the pipeline. Those projects don’t include the New Suez Canal alone but extend to establishing new waiting areas to increase navigational safety in the waterway and best prepared in the face of emergencies, as well as enhance the quality of provided navigational services through developing traffic monitoring stations along the waterway, and upgrading the fleet of escort tugs and other auxiliary units that partake in the pilotage process in the Canal.

As for COVID-19, SCA is taking all the necessary measures and preventative precautions to best handle the situation at hand, as well as actively communicating with clients and consulting on how to achieve mutual interest. The Authority is also adopting a number of pro-active measures in the form of a bundle of incentives and rebates for various types of transiting vessels.

HMM Algeciras is equipped with an upgraded design of the structure which is meant to be more power-efficient, and thus, minimize the carbon emissions, to which the expected result is cutting 15% off operation costs.