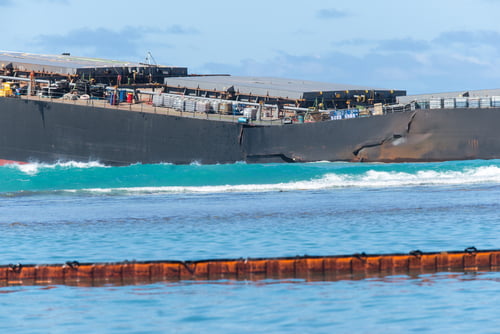 In Mauritius a court sentenced the captain and first mate of the MW Wakashio, whose grounding in 2020 caused the worst oil spill on the coast of Mauritius, to 20 months in prison.

Namely, the judge added that both defendants pleaded guilty and apologised. Captain Sunil Kumar Nandeshwar admitted he had been drinking alcohol as cargo ship Wakashio ran aground in July 2020, spilling more than 1,000 tons of fuel into the Indian Ocean. He and the Japanese-owned bulk carrier’s first officer — Hitihanillage Subhoda Janendra Tilakaratna — were found guilty of “endangering safe navigation.”

‘The captain and his second in command were irresponsible and did not deliver as they should on their ‘navigational duties’…the Court noted.

“The court took into consideration the fact that both defendants pleaded guilty and apologized. The sentence handed down is 20 months in prison,” said magistrate Ida Dookhy Rambarrun.

The captain said he had given instructions to approach Mauritian waters so the crew could acquire cellphone coverage and have the opportunity to get in touch with their families, but then disaster struck.

To remind, Wakashio’s spill was an environmental calamity for Mauritius, an Indian Ocean nation off the coast of East Africa that’s well-known for its gorgeous seashores and lagoons. It destroyed the livelihoods of fishermen and tourism staff and threatened biodiversity sizzling spots, together with outstanding snorkeling and diving areas.