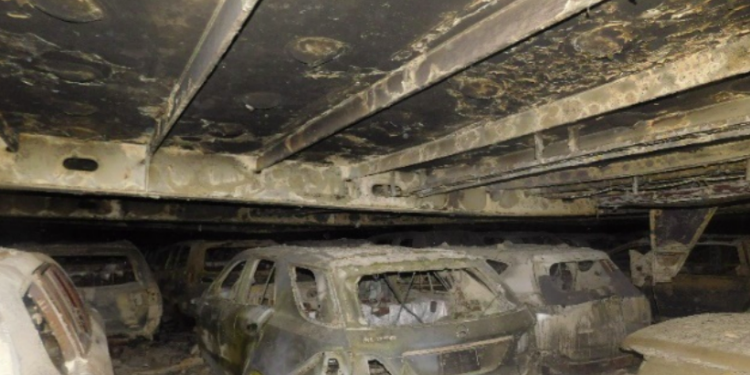 Cargo and structural fire damage on deck 8 of a cargo ship, taken in June 2020 / Credit: USCG

The US Coast Guard issued a marine safety alert on fire hazards on ro-ro vessels and the importance of proper cargo stowage. This follows a recent casualty onboard a Ro-Ro cargo ship in Jacksonville.

The incident occurred in June 2020 and the ship was carrying used vehicles, which varied in condition from like new to partially destroyed.

After the cargo was loaded, and prior to getting underway, the vessel’s crew observed smoke coming from ventilation ducts which led from cargo holds. While attempting to identify the source of the smoke, the crew discovered a vehicle fire.

The crew’s attempts to fight the fire were unsuccessful and they abandoned the vessel after the fire became out of control. Local firefighters arrived on scene shortly thereafter and began fighting the fire. Subsequently, several explosions occurred and the vessel burned for over a week.

This marine casualty highlights an important safety issue: Ro-Ro cargo vessels carry unique cargo that can have higher potential to introduce fire hazards if required safety protocols are not properly implemented in accordance with applicable regulations,

The causal factors, according to the USC investigation, included:

Because the vessel had previously loaded vehicles in multiple ports across the country, it became evident that the hazardous conditions onboard this vessel were not limited to a single Captain of the Port (COTP) zone.

Within three months of the aforementioned incident, a similar Ro-Ro vessel suffered a vehicle fire onboard while in the Sector Jacksonville’s area of responsibility.

Although this fire was not as severe as the incident in June of this year, it is likely due to the same contributing factors based on initial findings.

Vehicles that are shipped on vessels from ports in the US are required to meet the IMDG Code or 49 Code of Federal Regulations (CFR) 176. In accordance with the IMDG Code, to which international Ro-Ro vessels are subject as per 74 SOLAS (2014) Ch. VII Reg. 7, motor vehicles are assigned the hazardous material number UN 3166 and have IMDG Code special provisions 312, 356, 961, 962, and 970.

In accordance with current requirement, the Coast Guard would like to remind vessel owners, operators, charterers, and business entities engaged in shipping of vehicles on vessels of the requirements: