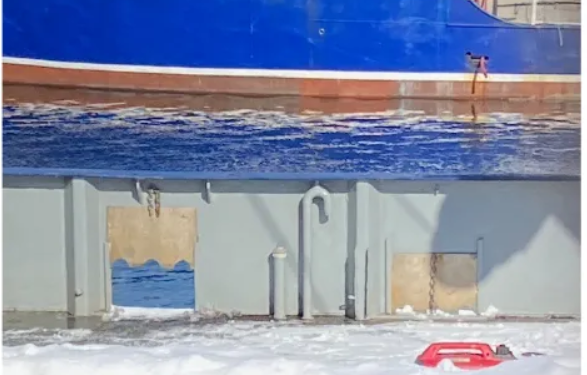 US Coast Guard recently reported that the capsize of a commercial fishing vessel, brought to light a potentially dangerous situation involving the closure of freeing ports.

According to the Marine Safety Alert 03-21, as the vessel dragged for sea scallops, a wave unexpectedly crashed over the port railing, causing the vessel’s deck to fill with seawater.

In fact, the seawater, now trapped on deck, was unable to drain overboard as closure devices blocked all freeing ports. The investigation identified the closure of the freeing ports as a causal factor in why the vessel capsized.

Following the above, it has come to the attention of Commercial Fishing Vessel Examiners and Marine Casualty Investigators that some commercial fishing vessel operators, at times, close or block their freeing ports to prevent their catch from washing off deck after hauling gear.

As explained, freeing ports occasionally remain closed following haul back, and sometimes throughout the entirety of the vessel’s voyage.

While the practice of blocking freeing ports may appear harmless, it can have disastrous consequences if seawater accumulates on deck.

To put things in perspective, a vessel’s deck that measures 37-feet by 14-feet having only one inch of water covering it, equates to 2,763 pounds of surplus liquid weight. The addition of weight on deck, above the vessel’s center of gravity (COG), will have a negative impact on the vessel’s stability.

When an external force (such as waves and wind) rolls the vessel from side-to-side, the trapped water on deck will also slosh from side-to-side, causing a free surface effect. In the above example, that means 2,763 pounds of seawater would be moving back and forth on the main deck.

As the water moves, the COG of the vessel also shifts. Seawater added on deck above a vessel’s COG and offset from the centerline by sloshing, creates a significantly greater negative impact on the vessel’s stability.

Open freeing ports allow water on deck to freely escape overboard, preventing the weight shift of seawater from having a dangerous impact on the vessel’s stability.

In light of the situation, Coast Guard strongly recommends that vessel owners and operators: