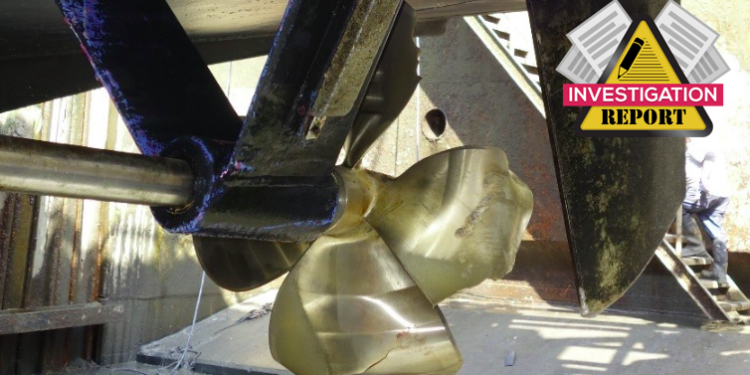 The Transportation Safety Board of Canada (TSB) issued an investigation report into the bottom contact of the passenger vessel Island Queen III near Whiskey Island off Kingston, Ontario, in August 2017. The Board issued three safety concerns relating to carriage of lifejackets, the evacuation of passengers during an emergency, and specialized training for crew members who are responsible to manage passengers during an emergency.

In the early afternoon of 8 August 2017, the passenger vessel Island Queen III left port for a planned three-hour cruise in the Thousand Islands area of the St. Lawrence River, sailing out of Kingston, Ontario with 290 people on board.

Almost immediately after departing, the vessel encountered three separate fleets of local sailing school dinghies, causing it to deviate from the planned route.

As the vessel moved through a narrow portion of the route, it strayed into shallow water and struck bottom, breaching the hull and causing water to flood a compartment below the main deck.

The vessel remained afloat and returned to the dock about 30 minutes later. There were no injuries.

The investigation determined that the impact of the contact caused a breach measuring approximately 30 cm in the vessel’s hull below the waterline. It also caused the port engine to stall and the port rudder to jam.

While the crew inspected the vessel for damage, the master steered back onto the planned course, restarted the port engine, and turned the vessel back toward Kingston.

Halfway back to Kingston, the water in the compartment was approximately 60 cm deep and, by the time the vessel docked and passengers began disembarking, the water level had reached approximately 1.4 m.

The investigation unveiled a series of safety deficiencies in respect to responding to emergencies onboard passenger vessels:

-Availability of lifejackets for children and infants onboard

Transport Canada (TC) requires every vessel more than 5 gross tonnage and certified to carry more than 12 passengers to carry a lifejacket for each member of the complement.

In addition, vessels must carry children’s lifejackets for at least 10% of the maximum complement – or 1 for each child onboard, whichever is greater.

The Island Queen III carried 31 child-sized lifejackets, 10% of its maximum complement. However, there were 32 children, as well as 4 infants, onboard.

The master and crew were unaware of the number of children and infants on board, as there was no procedure in place to determine and record these numbers. There is also no Canadian requirement for vessels to carry any lifejackets for infants.

The Island Queen III, like all passenger vessels, was required to have a procedure for evacuating all passengers and crew members within 30 minutes of an abandon-ship signal.

The investigation revealed that there was no procedure in place at the time of the occurrence. TC, who is responsible for overseeing compliance, does not have formal procedures in place to verify compliance with this requirement.

Until TC implements a formal validation and approval process for passenger vessel evacuation procedures, crews and passengers may not be prepared to evacuate safely in an emergency.

The current regulations related to this type of training are based on vessel size and the type of voyage, irrespective of the number of passengers onboard.

Although smaller vessels, such as the Island Queen III, may be certified to carry dozens or hundreds of people, the crew members are not required to be trained in passenger safety management.

Until the crews of these vessels are required to take the appropriate passenger safety management training, there remains a risk that crew members will not be adequately prepared in emergencies.

The operator of the Island Queen III has undertaken a number of steps to improve safety by addressing some of the identified deficiencies, including: