Bourbon, a French offshore vessel owner, launched a rescue operation for ‘Bourbon Rhode’ anchor handler tug supply (AHTS), which suffered a water ingress in the rear of the vessel as it was affected from bad weather conditions associated with category 4 Hurricane Lorenzo. Despite search and rescue efforts, the vessel has sunk, resulting to three saved crewmembers and 11 still missing.

*see updates at the end*

The vessel was sailing to Guyana, 1,200 nautical miles off Martinique Island and 60 nautical miles south-south east of the hurricane in the Atlantic when it suffered problems.

The owner company commented that a crisis well was immediately conducted to ensure the coordination of the rescue of the vessel and its crew, also cooperating with authorities and the Regional Operational Center of Surveillance and Rescue (CROSS) West Indies-Guyana.

To rapidly provide assistance to the tug-in-need, the CROSS asked the nearby bulk carrier, SSI Excellent, to alter its voyage and help the Bourbon Rhode. According to the owner, the bulk carrier was expected to arrive in the area of the incident in early morning of September 27. 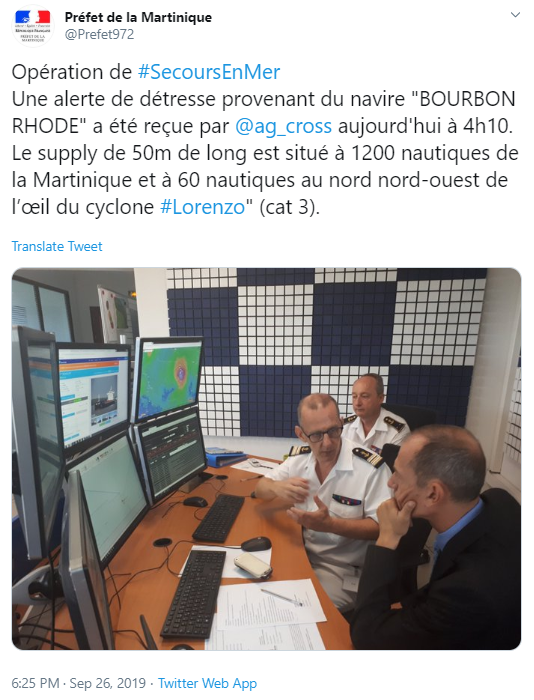 The company added that

In particularly adverse weather conditions, the 14 crew members are facing a water ingress in the rear part of the vessel.

Given that hurricanes cause disruption to vessel and ports operations, after Hurricane Dorian in the US, the American Club issued an alert, informing that vessels trading in regions affected by these extreme weather events will also face additional physical risks.

Now, 3 crewmembers were saved, whereas 11 are missing.

The vessel owner confirmed that the vessel sank in the Atlantic, with search and rescue operations looking for the remaining 11 crewmembers.

To rapidly provide assistance to the tug-in-need, the CROSS asked the nearby bulk carrier, SSI Excellent, to alter its voyage and help the Bourbon Rhode.

The company issued a statement informing

It has been confirmed that the vessel has sunk. The search continued to be carried out in weather conditions that are improving

The 3 crew members are currently taken in charge by the medical support team onboard the commercial vessel, which provided assistance, and are currently placed under medical observation.

29/10 update:Following a Sunday Evening Update, Bourbon informed that the search for the Bourbon Rhode continues with the full support of Cross AG and the French navy, under the authority of the Prefect representing the French national maritime authority.

Five commercial vessels have changed course in order to bring assistance to the rescue teams. A Falcon 50 of the French navy, as well as the aircraft of the American National Hurricane Center (NHC), conducted numerous overflights of the search area. The French navy’s surveillance frigate “Ventôse” and “Panther” helicopter will intervene tomorrow, September 30

Yet, on Saturday evening, a capsized fast rescue craft was spotted first by the NHC aircraft and then by the Falcon 50. 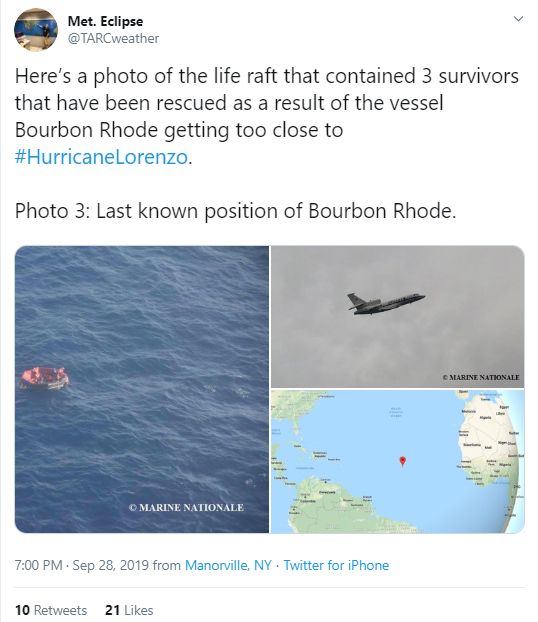 Following the search and rescue operations the company issued a statement, according to which:

BOURBON is sad to report the death of one of the crew members of the Bourbon Rhode. The body of the missing seafarer was located by one of the aircraft involved in the search and has been recovered by one of the five vessels that came to assist. The seafarer’s family was immediately notified and they requested that the identity not be disclosed.

1/10 update: Today Bourbon informed that it mourns the death of two other crew members of the Bourbon Rhode. Namely, the bodies of two mariners were discovered at sea last night, and were transferred on the French navy “Ventôse” frigate.

2/10 update: The body of this fourth seafarer was discovered yesterday and transferred on the French Navy’s “Ventôse” frigate.

We remain fully mobilized to pursue relief operations and reiterate our warm thanks to all the teams that have volunteered and are helping us in our search.