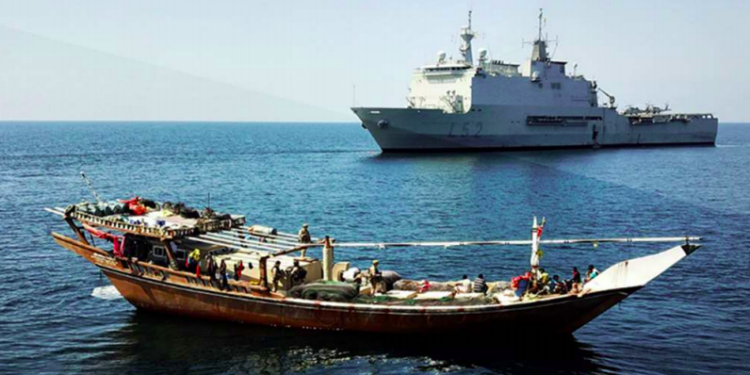 Above image is used for illustration purposes only / Credit: EU NAVFOR

The Suez Canal blockade, not only unveiled the vulnerabilities posed by strategic straits and canals, but also sparked off a quick threat and risk assessment on EU NAVFOR ATALANTA side, the EU NAVFOR said.

This is according to a new MSCHOA information bulletin by EU NAVFOR , aiming to provide insights into assessments and activity of EU NAVFOR assets in the Southern Red Sea, the Gulf of Aden and Western Indian Ocean. The publication is in line with EU NAVFOR efforts to contribute to the safety, security, and freedom of navigation of merchant vessels in the region.

If the impact of COVID19 on the maritime domain was clear and told us that we never should lower guard, the incident of MV EVER GIVEN” in the Suez Canal causing a blockade for six days, and ultimately leaving more than 400 vessels waiting for the passage, reminded us not only the vulnerabilities posed by strategic straits and canals but also sparked off a quick threat and risk assessment on EU NAVFOR ATALANTA side,

Although registrations with MSCHOA Voluntary Registration Scheme remained within typical figures and its individual assessment of vulnerability based on vessels’ reports showed no significant changes, the service stressed the need to consider BMP5 when planning a voyage transiting across the Gulf of Aden, Somali Basin, Red Sea and the Arabian Sea.

Launched in 2008, Operation Atalanta is a current counter-piracy military operation at sea off the Horn of Africa and in the Western Indian Ocean, which is the first naval operation conducted by the European Union.

There was an alleged attack on a vessel in the Gulf of Oman on the 13th of April. While there was no official confirmation of the event, considering a sequence of reported events, and that specific interests could be correlated, EU NAVFOR assumes that the general threat remains unchanged.

EU NAVFOR will continue to monitor the area of responsibility, detecting any anomaly that could be associated to inconsistent behavior, such as any unexpected change in course, speed or drifting. In these cases, our Watchkeepers call immediately the affected merchant vessel to check the situation. Reporting incidents is essential, and reporting to UKMTO and register with MSCHOA lays at the foundation of BMP5.