Using data from underwater robots, scientists have discovered that beaked whales prefer to feed within parts of a Navy sonar test range off Southern California that have dense patches of deep-sea squid. Therefore, the British Ecological Society published a study ‘Quantifying deep-sea predator–prey dynamics’ that shows that beaked whales need these prey hot spots to survive, and that similar patches do not exist in nearby ‘sonar-free’ areas.

The new research, led by Brandon Southall at the University of California, Santa Cruz, and Kelly Benoit-Bird at the Monterey Bay Aquarium Research Institute, was launched to better understand why whales keep returning to the test range despite the risks.

For decades, the US Navy uses high-powered sonar during anti-submarine training and testing exercises in various ocean habitats, including the San Nicolas Basin off Southern California.

According to the study, beaked whales are sensitive to these military sonars.

After legal action from environmental activists related to these risks, US Navy altered some training activities, created sonar-free areas and spent many years and millions of dollars to find a way to decline the harm to beaked whales and other mammals.

The researchers in order to understand whales returning to sonar-areas, used an underwater robot with echosounders to measure the abundance, density, and sizes of deep-sea squids in different parts of the Navy test range, as well as in nearby waters.

Moreover, the developed an ‘energy budget’ for beaked whales, presenting the costs in time and calories for hunting for squid.

This helped the researchers estimate how many dives the whales needed to make in order to get enough food to survive in different areas.

In comparison to baleen whales, beaked whales aren’t able to expend too much energy into diving and that results to capturing less squid.

In areas where the concentration of prey is low, the beaked whales must work harder and expend more calories, making reproduction and raising young that much more challenging. Some of the areas under study were so poor in terms of prey that whales likely could not meet their basic energetic requirements if they only fed there.

A place of the Navy test range off Southern California encompasses one of these hot spots. Squid were 10 times more abundant in the area preferred by the whales. In this preferred area, the whales could get enough food by making just one dive a day.

In a nearby sonar-free area, established with the idea that beaked whales could shelter in these areas while the sonar tests were underway, the whales would need to make between 22 and 100 dives per day to get enough food – something that would be difficult or impossible to do. 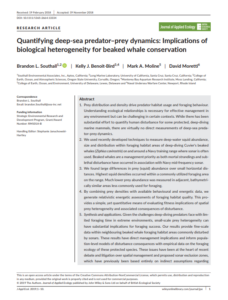