Above image is used for illustration purposes only / Credit: PSA

DNV GL in cooperation with Menon Economics published the report “The Leading Maritime Capitals 2019”. The report provides insight on which maritime cities provide the best support for companies in shipping and related services. Singapore retained the first position from 15 maritime capitals.

In spite of a weak trade cycle in traditional shipping and offshore oil and gas markets, Singapore ranked first in three of the five pillars of the ranking:

In the two remaining pillars, London reached the first position in Maritime Finance & Law, with Oslo being number one in Maritime Technology.

Overall, Hamburg is in number two, while Oslo dropped from third to seventh. In addition, Rotterdam and Hong Kong showed the biggest improvement, as they climbed to third and fourth place respectively, with London rounding out the top five, and Shanghai at number six.

In the report, an interesting observation is that most cities are ranked consistent across the objective and subjective indicators. Two cities stand out: Oslo and Tokyo.

Concerning Hong Kong, it is ranked 2nd by the industry experts as the most attractive location for shipping operations. In terms of the number of listed maritime companies on their local stock exchanges, Hong Kong has also boosted its numbers since 2017, indicating that it is an attractive market for registering new stocks.

Maritime Singapore’s continuous effort to strengthen its attractiveness as an international maritime centre has been well received by the industry. The strong results on both the objective indicators and expert assessments indicate its relevance as a critical node within the maritime sector regionally and globally.

The maritime industry is experiencing a peak of a digital transformation including the adoption of disruptive and innovative technologies. The maritime industry experts voted Singapore, Oslo, Copenhagen and London to be the cities best prepared for the digital transformation of the industry. Oslo has also forged its position as the world’s leading centre for sustainable technologies and solutions for the oceans.

Oslo has a higher score than the combined value of the three next in the rank, namely Singapore, Copenhagen and Rotterdam, Erik W. Jakobsen, partner in Menon Economics, explained.

Moreover, the report presents a Top 5 ranking concerning a variety of sectors in the shipping industry starting from:

When assessing the importance of the world’s shipping centers with an equally weighted combination of four objective indicators and subjective evaluations from 200 leading maritime professionals, Singapore, Athens and Hamburg take the top three spots in the total ranking of the leading shipping centers. With Hong Kong and Shanghai coming next in the ranking, this means that three of the top five shipping centers are now located in Asia. This is a change from the 2017 edition of this report, where European maritime cities were leading the top five.

Overall, London is ranked first in the world for maritime finance and law, followed by New York, Oslo, Hong Kong and Singapore. London has a special position in the financial industry globally and is widely recognized for its law-related and marine insurance services. It is home to world-leading institutions, such as Lloyd’s for insurance. New York, Hong Kong and Singapore together with London, are considered the four leading global financial cities according to the Global Financial Centres Index.

Singapore is a top performer for port services and logistics, securing the first position on both objective criteria and experts’ assessment. Singapore is home to the world’s third largest port in terms of container and cargo volume handled.  Rotterdam comes in the 2nd position of leading port cities, followed by Hong Kong, Shanghai and Hamburg.

Singapore remains the most attractive and competitive maritime city in the world, measured by objective indicators and experts’ assessments. Singapore is unsurpassed in most of the benchmarking criteria used in this pillar,
except for three of the objective indicators where Copenhagen, Rotterdam and Helsinki each take the first position compared to Singapore. London and Copenhagen are in a tie behind Singapore for this pillar, both having improved from their 2017 rank.

When asked to look five years into the future, the experts expect that Singapore will retain its top position, but it will have stronger competition from Shanghai, and Dubai, which could climb into the top five overall by 2024.

Hamburg, Rotterdam, London and Oslo are expected to retain a strong presence in Europe.

You may see more information the PDF herebelow 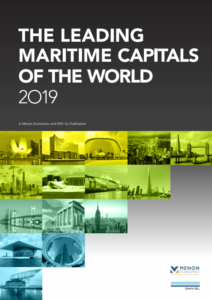