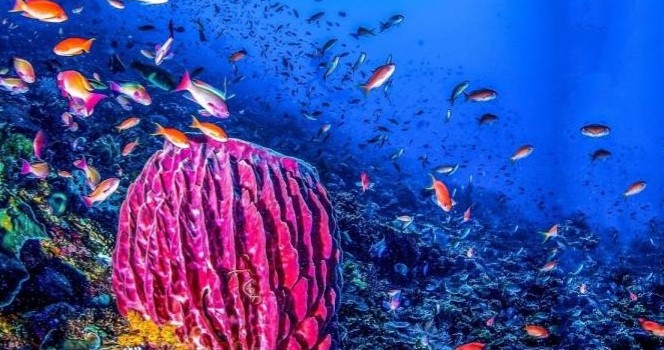 Above image is used for illustration purposes only / Credit: Bureau Veritas

More than a year into the global pandemic, the human and economic toll has been unprecedented, and recovery efforts so far have been uneven, inequitable and insufficiently geared towards achieving sustainable development. The global community is at a critical moment in its pursuit of the Sustainable Development Goals (SDGs).

Despite a pandemic-related economic slowdown, the climate crisis continues largely unabated. A temporary reduction in human activities resulted in a dip in emissions. However, concentrations of greenhouse gases continued to increase in 2020, reaching new record highs.

It was one of the three warmest years on record, with the global average temperature about 1.2°C above the 1850–1900 baseline. The world remains woefully off track in meeting the Paris Agreement target of limiting global warming to 1.5°C above pre-industrial levels and reaching net-zero carbon dioxide (CO2) emissions globally by 2050.

In fact, according to the Sustainable Development Goals report:

In the face of looming catastrophe, climate action is gaining momentum. In June 2020, the Race to Zero campaign was launched to form a coalition of businesses, cities, regions and investors around net-zero carbon emission initiatives, and set out specific near-term tipping points for more than 20 sectors of the global economy

In 2015, 196 Parties to the Paris Agreement committed to transforming their development trajectories towards sustainability and called for limiting global warming to well below 2°C – ideally 1.5°C – above pre-industrial levels.

On the other hand, the COVID-19 pandemic significantly reduced human activities in 2020, leading to a temporary fall in CO2 emissions. Developed countries saw the steepest declines, averaging drops of almost 10%, while emissions from developing countries fell by 4% relative to 2019.

Nonetheless, despite the temporary reduction in emissions overall in 2020, real-time data from specific locations, including Mauna Loa, United States, and Cape Grim, Tasmania, indicate that concentration levels of CO2, methane and nitrous oxide continued to increase in 2020.

By December 2020, emissions had fully rebounded and registered 2% higher than the same month in 2019.

As of May 2021, 192 Parties had submitted their first NDCs to the Framework Convention on Climate Change secretariat. Moreover, as of December 2020, 48 of them were submitted as new or updated NDCs, representing 75 Parties and accounting for 30 per cent of global greenhouse gas emissions in 2017.

Adaptation information was included in 39 of these 48 new or updated NDCs. Countries are articulating more quantified targets and indicators for adaptation, and identifying links between adaptation, the Sustainable Development Goals and other frameworks.

As of May 2021, 125 of 154 developing countries were in the process of formulating and implementing national adaptation plans, and 22 countries have submitted their plans to the Framework Convention on Climate Change secretariat

An increasing number of countries are also prioritizing the formulation and implementation of national adaptation plans to boost their efforts to adjust to a changing climate. These include building flood defences, setting up early warning systems for cyclones, or switching to drought-resistant crops. 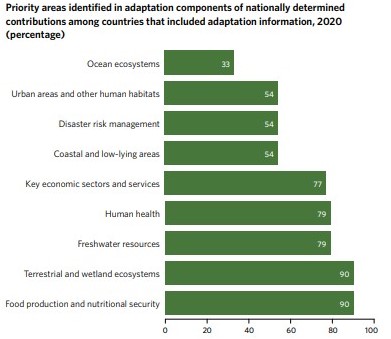 The extent of marine protected areas has increased significantly, with 2020 coverage reaching 7.74% of global coastal waters and oceans. The 10% target set for 2020 may still be met, because several sites planned for designation in 2020 were delayed.

However, safeguarding key biodiversity areas (KBAs) remains crucial to the sustainability of oceans. In fact, a recent example from the South Atlantic used satellite tracking data for 14 species of seabirds and seals to pinpoint breeding grounds and feeding sites crucial to the preservation of these and other species.

Efforts to reduce nutrient inputs into coastal areas are yielding results in some regions; however, algal blooms suggest that coastal eutrophication remains a challenge

according to the report.

Achieving Goal 14 requires the implementation of international instruments, through legal and institutional frameworks, for the conservation and sustainable use of oceans in a cross-sectoral and integrated manner. While progress has been made, implementation varies among the instruments, highlighting the need for renewed effort and increased support.

Part of the framework developed over the past decades to combat illegal, unreported and unregulated (IUU) fishing includes the Agreement on Port State Measures.

The Agreement came into force in 2016 and currently includes 66 Parties (including the European Union). Its objective is to prevent, deter and eliminate IUU fishing by preventing vessels engaged in it from using ports and landing their catches.

Between 2018 and 2020, the average degree of implementation of international instruments to combat IUU fishing improved, with the global composite measure rising from 3/5 to 4/5 over this period.

This slight improvement in the global trend helps bring the target of eliminating IUU fishing closer to being met. However, more concerted efforts are needed

Marine research can be expensive and logistically challenging, requiring advanced technologies and equipment, research vessels and specially designed sensors and facilities. However, the proportion of gross domestic expenditure on research and development devoted to ocean science is decidedly smaller than that of other major fields of research and innovation.

The full impact of the COVID-19 pandemic on ocean science is still unknown. Immediate effects have included dramatic reductions in ocean observations with almost all research vessels called to home ports. Mooring arrays (buoys and moored systems with instruments and communication equipment) are at risk of failure, threatening long-lasting repercussions for international ocean research. 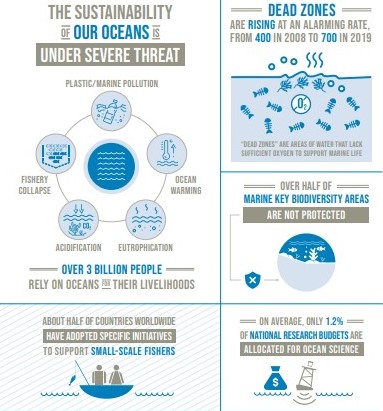