The maritime sector in Scotland directly supports nearly £10 billion in turnover and 41,000 jobs, according to a new report launched by the Centre for Economics and Business Research (Cebr) and commissioned by Maritime UK and the Scottish Maritime Cluster.

The report, launched at the UK Chamber of Shipping and British Ports Association Scottish reception, shows that the marine engineering and scientific industry is the largest industry within the Scottish maritime sector in terms of economic activity, directly contributing £2.5 billion in Gross Value Added and directly supporting around 29,000 jobs in 2017.

Indirectly, it is estimated the maritime sector in Scotland helped to support a total of £19.5 billion in turnover and 155,000 jobs.

This report highlights the importance of the Scottish maritime sector to the Scotland economy and shows just how well it is doing. The Scottish maritime sector has shown great leadership in the development of new technologies, with hybrid and battery-operated ferries already in service, and the Scottish oil and gas and renewables industries are leading the way in helping meet the UK’s energy needs and providing cleaner, greener energy,

In addition, the Cebr found that employees in the Scottish Maritime Sector are found to be highly productive in the eight years considered in this study, as the average job is estimated to have contributed around £90,600 in GVA in 2017.

Meanwhile, the Maritime Sector contributed an estimated total of £900 million in tax revenues in 2017, spread across VAT, Corporation Tax, Income Tax, National Insurance Contributions (NICs) and Business Rates, while it also helped to support a total of £7.8 billion of GVA in 2017, the report reads.

Concluding, it is estimated that the Maritime Sector in Scotland helped to support a total of £19.5 billion in turnover (through business turnover), 155,000 jobs and £5.1 billion through the compensation of employees in 2017.

Cebr forecast indicates that Scottish-based Maritime turnover and GVA are set to grow at a Compounded Annual Growth rate of 2.6% over period 2017 to 2023. This translates into a cumulative nominal growth of 14% for 2019-2023.

These figures demonstrate the continued success of the Scottish maritime sector. The unique mix of ownership models and a stable development framework has enabled this success, but this must not be taken for granted. An uncertain economic outlook and huge decarbonisation challenges mean that the Scottish maritime sector must continue to innovate and invest in new technologies and processes. 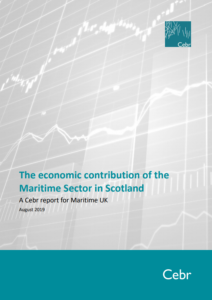