Colombian authorities are very alert to drug related issues and frequently search vessels both onboard and underwater in response to intelligence reports. As such, the local P&I Consultants Pandi Colombia have provided some precautionary anti-narcotics guidelines for operators who trade in Colombia.

At some ports and terminals an underwater inspection of the hull is mandatory, particularly at facilities specialising in oil or coal.

The following list cites the ports on the Caribbean Coast where an UWI is mandatory before departure:

Strategies used by narcogroups include the following: 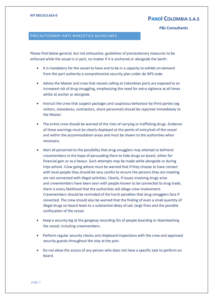