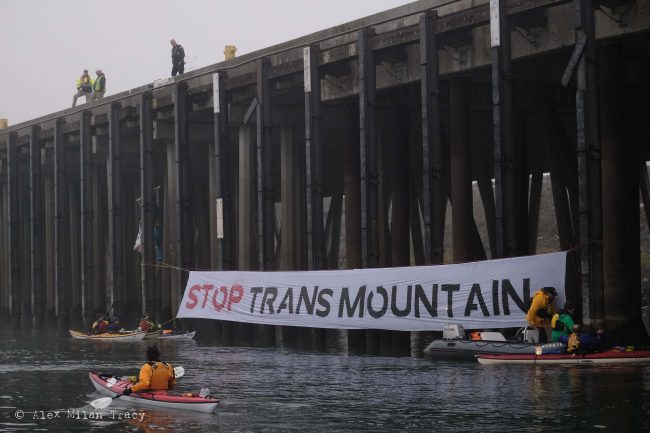 On Monday, November 4, a law enforcement team of Portland's Coast Guard cooperated with local law enforcement officers to remove protesters of the "Portland Rising Tide" from Port of Vancouver's Berth 9, where the activists were hanging from hammocks trying to block the freighter Patagonia, which is carrying pipe material for the controversial Trans Mountain Pipeline expansion project.

As reported, five members of the Rising Tide activist group had locked themselves to the pier at Berth 9 to prevent the pipes' delivery to Vancouver, BC, an action that was in collaboration with additional activist group "Mosquito Fleet" which supported the activists in kayaks and small craft.

The Coast Guard reported that they were informed of the situation by the Port of Vancouver and the Patagonia’s shipping agent. At the time of the notification, the Patagonia was transiting the Columbia River, inbound for Berth 9.

The hypocrisy of the Port of Vancouver is embarrassing. The Port Commissioners should be ashamed — they claim to be environmental stewards concerned about climate catastrophe, yet they are enabling the dirtiest pipeline project in the world by allowing this pipe to pass through the port.

I’m here because tar sands crude transported by the Trans Mountain Expansion project would require three times more water for extracting and refining and would release 15 percent more greenhouse gas per gallon of gasoline when compared with conventional oil.

To better deal with the situation, the Coast Guard established a safe zone and a safety marine information broadcast was being broadcast over VHF-FM radio. The Coast Guard has enacted special local boating regulations to ensure the safety of waterway users.

Our goal is to ensure all recreational and commercial waterway users are allowed to have appropriate access to the Columbia River. Activists have the right to peacefully protest on the river as long as they are not impeding vessel movement.

The Trans Mountain Pipeline expansion project has led to many controversies, as in March 2019, the National Energy Board expressed its opposition on the project, adding that if the BC government continues expanding ferry routes in the area, there is an increased oil tanker traffic associated with the Trans Mountain pipeline expansion. Yet, a month earlier, the Canadian National Energy Board (NEB) had already has issued recommendations for the approval of the project.