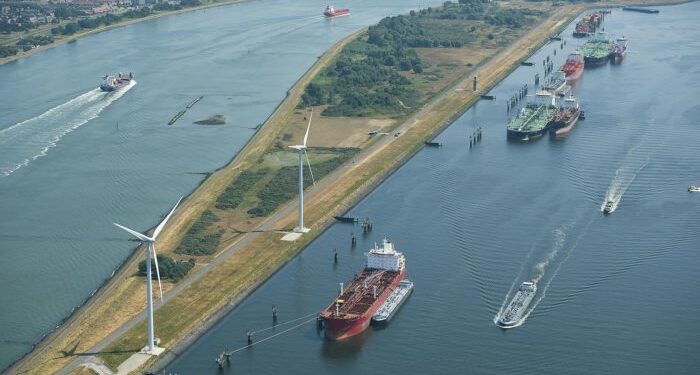 Port of Rotterdam’s throughput in 2018 resulted to 469.0 million tonnes, a little bit higher than 2017. Container transhipment reached a 4.5% increase in tonnage, whereas measured in TEUs, the standard unit for containers, increased by 5.7% and the annual total was 14.5 million TEUs.

Mainly, despite the increase in container transhipment, the crude oil, mineral oil products and agribulk decreased. In comparison the throughput of LNG increased by 163.6% and biomass saw a 31.6% rise.

The Port Authority’s internationalisation strategy was given a significant boost in 2018 by the acquisition of a minority stake in the Brazilian port of Pecém.

Moreover, the port’s growth is also based on the social contribution of the port’s authority, as they focus on safety, both through physical infrastructure such as security cameras and in terms of resilience against cyberattacks.

The Port of Rotterdam Authority is committed to drastically reducing CO2 emissions in order to help achieve the ambitious national climate target.

Liquid bulk recorded lower throughput volumes in all subcategories in 2018. Despite the decrease, the throughput exceeded 100 million tonnes for a fourth consequent year.

The increase in LNG throughput was mainly caused by transhipments of LNG, originating from the Yamal field (Northern Russia), from ice-class LNG tankers to ‘normal’ LNG tankers, which then transported the cargo onwards to Asia and elsewhere.

The dry bulk segment showed only a slight downturn in throughput, decreasing by 3%.

The coal subcategory throughput rose by 2.3%.

Thermal coal remained at the same level as 2017.

The throughput of coke coal rose due to the success in attracting cargo packages for Germany.

Iron ore throughput fell in 2018, among other reasons due to the renovation of a blast furnace and because of stagnating demand from the steel industry.

The fall in agribulk throughput in Rotterdam was partly caused by the shift of cargo packages to Amsterdam.

Container transhipment saw a strong increase in 2018, as a result of which market share was gained in the Hamburg-Le Havre range.

Container exports developed less strongly, partly due to Chinese import restrictions on waste flows. The shortsea segment suffered from slowdowns in the British and Russian economies.

The British RoRo trade showed less development, mostly because of the Brexit uncertainty on the British economy.

The transhipment of other breakbulk cargo was around the same as the volume in 2017.

The Port Authority expects the throughput volume to slightly increase in 2019, with container sector growth being lower than the exceptional levels seen in previous years.