The Canaveral Port Authority in collaboration with the Business Research and Economic Advisors launched an economic study presenting the economic contribution of the port of Canaveral to the state of Florida for the year 2018.

Namely, the study's goal was to quantify employment, wages, expenditures and taxes that were directly and indirectly related to the movement of cruise passengers and cargo through Port Canaveral, the operational activity of tenants who conduct their business on property owned and maintained by CPA, and patrons of CPA parks, recreational facilities and attractions.

#1 Passengers: 2.1 million multi-day cruise passengers in 2018. This was the second-most passenger embarks from a U.S. cruise port, accounting for 16% of total U.S. embarkations.

#3 Economic activity: $1.94 billion in direct expenditures in the Central Florida economy, resulting to the direct employment of more than 17,200 workers who received $729.4 million in wages.

#4 Tax revenues: $107.2 million in total state and local tax revenues. These taxes were predominantly sales, use and excise taxes paid across the state.

According to the study, the Port of Canaveral plays a crucial role, having a direct or indirect impact to estimated expenditures, jobs and wage income.

In light of the newly-launched study, port CEO Captain John Murray commented that

We have long appreciated the significant role our business lines and all operations bring about in helping to grow the local and regional economies.

He added that the port is boosting the local and regional economies; The port's growth attracts more visitors, generating tax revenues to support the communities and create more jobs.

Port Canaveral has been taking steps towards developing, as in early 2019 the Authority begun the construction of Canaveral’s new Cruise Terminal 3 complex, called  the Launch Pad. 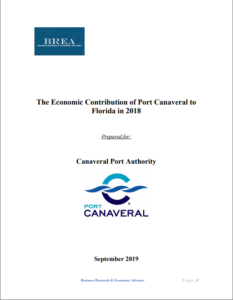