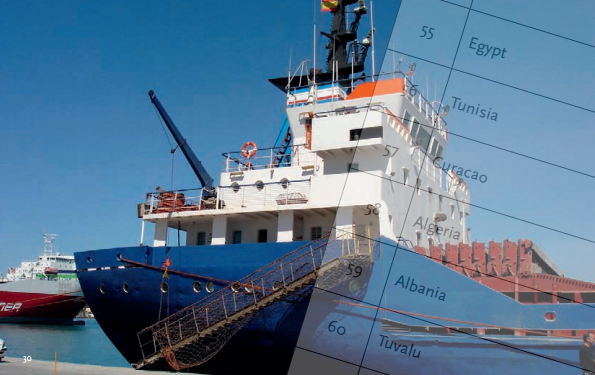 Paris MoU has published its Annual Report on Port State Controls which contains details of the main developments in the Paris MoU for the year and the outcomes of their inspections.

Regarding banning, most cases involved ships which have been banned for multiple detentions (45). 5 ships have been banned a second time. A number (12) were banned for failing to call at an indicated repair yard. The remaining 3 cases involved ships which “jumped the detention”, by sailing without authorization. Over a 3 year period the flags of the United Republic of Tanzania, the Republic of Moldova, Saint Vincent and the Grenadines and Togo have recorded the highest number of bannings. Looking at the Paris MoU “White, Grey and Black Lists” the overall situation regarding the quality of shipping seems to be stabilizing. Although individual flag states have changed lists, the total amount of 43 flag states on the “White list” equals 2014.

International Register of Shipping is bottom of the list in 2015, in terms of poor performance, followed by Universal Shipping Bureau Inc and Bulgarian Register of Shipping. For several years a joint submission with the Tokyo MoU to IMO has addressed the correlation between flags and ROs working on their behalf. The results are published in the Annual Report as well. Useful information for the industry that would like to stay clear of the risk of sub standard shipping.

After an increase of the total number of inspections in 2014, the number has slightly decreased. Since 2011 (the start of the NIR) the average detention percentage had slightly increased annually until 2013 (3.78%), after which a significant decrease has been recorded for 2014 (3.32%). 2015 is at the same level, 3.33%. Spain, Italy, the Netherlands, France, Germany, Greece and the United Kingdom contributed most to the overall inspection efforts in terms of percentage, together over 51%. High Risk Ships have been operating mostly in the southern part of the region, while Low Risk Ships have been calling in the north western part of the region. With 1,166 inspections and 131 detentions the ships flying a “black listed flag“ score a detention rate of 11.23%, which is similar to 2014 and 2013. For ships flying a “grey listed flag” the detention rate is 8.58%, which is significantly higher than 2014 (6.27%). For ships flying a “white listed flag” the detention rate is 2.50% which is at the same level as 2014.

With a total number of 17,858 inspections performed in 2015 the inspection figures show a decrease of 3.1% compared with the figures of 2014. Each individual ship was inspected an average of 1.17 times per year, a rate which is slightly lower to that of 2014. After a drop in the number of inspections that started with the introduction of the New Inspection Regime in January 2011, and continued in 2012 and 2013, the 2014 figures showed an increase of 4%. 2015 shows a decrease of 3.1% again.

Detentions
Some deficiencies are clearly hazardous to safety, health or the environment and the ship is detained until they are rectified. Detention rates are expressed as a percentage of the number of inspections, rather than the number of individual ships inspected to take account of the fact that some ships are detained more than once a year.

Further information may be found in the report below