Damage to the portside is visible as the guided-missile destroyer USS John S. McCain (DDG 56) steers towards Changi Naval Base, Republic of Singapore, following a collision with the merchant vessel Alnic MC while underway east of the Straits of Malacca and Singapore / Credit: US Navy / Photo by Mass Communication Specialist 2nd Class Joshua Fulton

Insufficient training, inadequate bridge operating procedures and a lack of operational oversight were the key causes of the fatal collision between the USS John S McCain and the tanker Alnic MC in August 2017, the official report by the US National Transportation Safety Board revealed.

Ten sailors onboard the US warship 'John S McCain' died and 48 were injured after collision with the Liberian-flagged chemical tanker 'Alnic MC' in the Singapore Strait, one of the busiest waterways in the world, on 21 August 2017. There were no injuries to the crew of the Alnic MC. Property damage resulting from the collision exceeded $1.2 M.

The official investigation report by the NTSB came to confirm the conclusions of the US Navy investigation claiming lack of compliance with procedures and failures by watchstanders.

In the early morning on 21 August 2017, the US Navy destroyer John S McCain was proceeding in the westbound lane of the Singapore Strait Traffic Separation Scheme (TSS) bound for Singapore.

About 0520, the John S McCain commanding officer thought that the helmsman might become overwhelmed and ordered a second watchstander—a lee helmsman—to control the ship’s propeller thrust.

Shortly after, the helmsman reported he had lost control of steering and the vessel began to slowly turn to port.

At this time, the tanker Alnic MC was transiting in the westbound lane of the TSS, about three tenths of a mile off the destroyer’s port side in a speed of about 9.5 knots.

The master of the Alnic MC, who had control of maneuvering of the ship, noted the John S McCain as it began its turn to port and initially assumed that the Navy ship would pass between his vessel and another vessel ahead of the Alnic MC.

As the destroyer continued to turn into the path of his ship, he became increasingly concerned.

Once positive control of the John S McCain’s steering was reestablished in aft steering, watchstanders moved the rudders to 15 degrees to starboard, as ordered from the bridge.

However, this action and the action of the Alnic MC master to slow his vessel were not enough to prevent a collision, and, at 05:23:58, the bulbous bow of the tanker struck the port side of the John S McCain.

The impact breached the hull of the John S McCain in a berthing compartment where crewmembers were sleeping, killing 10 sailors.

About 3 minutes had elapsed between the reported loss of steering on the John S McCain and the collision.

The official report by NTSB determined the probable cause of the collision was a lack of effective operational oversight of the destroyer by the US Navy, which resulted in insufficient training and inadequate bridge operating procedures.

Contributing to the accident were the John S McCain bridge team’s loss of situation awareness and failure to follow loss of steering emergency procedures, including the requirement to inform nearby vessel traffic of their perceived loss of steering.

The NTSB concluded that during the process of shifting thrust control, a John S McCain watchstander unintentionally transferred control of steering from the helm to the lee helm station which resulted in a perceived loss of steering by the John S. McCain’s helmsman, however, steering control was available at all times in the accident sequence.

Also contributing to the accident was the operation of the steering system in backup manual mode, which allowed for an unintentional, unilateral transfer of steering control.

The NTSB...concluded in its report that the inability to maintain course due to a perceived loss of steering, the mismatch of port and starboard throttles producing an unbalanced thrust, and a brief but significant port rudder input from after steering combined to bring the John S McCain into the path of the Alnic MC. The decision to change the configuration of the John S McCain’s critical controls while the destroyer was in close proximity to other vessels increased the risk of an accident,

...NTSB said in an official statement.

Safety issues identified in this accident

Based upon its investigation of the collision, the NTSB issued seven safety recommendations to the US Navy seeking:

The US Navy is acting on a number of its own measures to address safety issues identified in the wake of the John S McCain accident and other recent western Pacific region accidents.

This accident shocked the shipping community as it came only two months after another deadly collision involving a US warship.

On 17 June 2017, the 'USS Fitzgerald' collided with a NYK container ship off Shimoda in Shizuoka prefecture, Japan, killing seven US Navy sailors.

Further details may be found in the official report by NTSB: 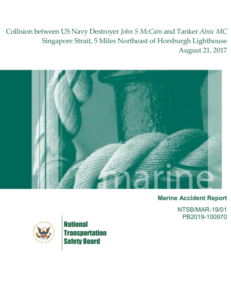