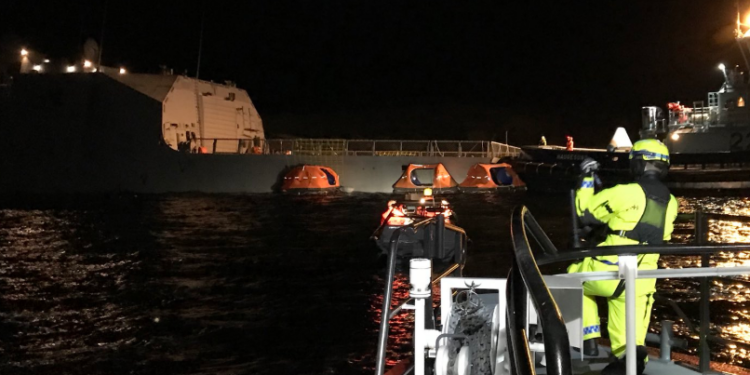 Seven people were slightly injured after the Norwegian frigate ‘KNM Helge Ingstad’ collided with the Maltese-flagged oil tanker ‘Sola TS’ off Bergen, Norway, in the early hours of Thursday 8 November. The warship developed dangerous list and all of its 137 crew were evacuated.

The KNM Helge Ingstad was returning from Nato military exercises, while the tanker had earlier left Equinor’s Sture oil shipment terminal carrying a cargo of crude oil. The tanker suffered minor damage and there was no injury or oil spill reported. However, the vessel will precautionary return to port for inspection, Reuters reported citing Ben Vikoeren from the Joint Rescue Coordination Centre for southern Norway.

On the accident, NATO Marcom announced:

The Norwegian Armed Forces are working with the Norwegian Coastal Authority to address the situation. The Norwegian frigate HNoMS Helge Ingstad is part of the Standing NATO Maritime Group One (SNMG1). The group was sailing in and around the Fjords, following their participation in exercise Trident Juncture 2018 which concluded on November 7th.

On the aftermath, oil major Equinor said it would gradually shut down operations at Sture terminal, while it has already do so at Kolnes plant, Oseberg and Troll, as a precautionary measure.

In connection with the collision between the frigate KNM Helge Ingstad and the tanker Sola TS at the Sture terminal in Øygarden Equinor will gradually shut down operations at Sture.
Personnel at Sture without emergency tasks has also been evacuated. The shutdown and evacuation are performed as a precautionary measure. As an operational consequence of the Sture shut-down also the Kolnes plant has been shut down. Production at some installations in the Oseberg and Troll areas in the North Sea have also been shut down…The company is in a dialogue with Norwegian authorities and has mobilized emergency resources to assist the police and the Joint Rescue Coordination Centre.

Meanwhile, the Accident Investigation Board Norway (AIBN) announced it has decided to investigate the collision, which occurred approximately at 04:03 hrs.

The cause of the incident is yet to be determined.