A new report by the Environmental Justice Foundation describes cases of slavery, debt bondage, insufficient food and water, filthy living conditions, physical and sexual assault and even murder on board fishing ships from 13 countries operating across three oceans.

To mitigate this problem, urgent ratification of international agreements aimed to improve workers' rights, inspections and enforcement is needed, the report says. Full transparency in the industry is also vital to end the cycle of abuse.

The report outlines various cases of abuse, on ships carrying the flags of developing and developed nations, from the EU and US to Asia and South America. It contains recent investigations presenting serious abuses on vessels ranging from Taiwanese long-liners fishing far out at sea for high-value tuna.

The vast majority of these abused fishers are migrants, often trafficked to the vessels via brokers who facilitate these abusive practices

In addition, undercover work in Thailand has shown how easily migrants, unable to speak Thai and unaware of labour laws and rights, can be exploited. Contracts are often written in Thai, meaning that workers cannot understand the terms and conditions.

The report also contains detailed evidence of this  cycle of abuse through interviews with fishers aboard Vietnamese vessels. Crew made complaints for long hours, restricted access to food and water, and only receiving pay if the catch was good.

What is more, they knew when they left port that they were headed to Thailand to fish illegally, as in Vietnamese waters there are no fish left.

Moreover, corruption and poor governance are feeding the problem. However, it is the almost total lack of transparency in the global seafood industry that facilitates such harmful practices to grow.

In the light of transparency absence, illegal operators can create as much confusion as possible around their identities, escaping detection by changing vessel names, concealing vessel ownership, flying different flags to avoid detection, or even removing ships from registers.

In order to break this cycle, EJF suggests adopting its Charter for Transparency:

It is absolutely clear that gaps in workers’ rights, fishing regulations, and enforcement procedures need to be urgently addressed. It is equally clear that this process will be greatly aided if all countries ratify, implement and enforce international agreements such as the International Labour Organization’s Work in Fishing Convention (C188). Likewise, the case for aggressive action against the brokers who trick migrants, selling them to traffickers and into debt bondage, is both clear and compelling

You may see further details in the PDF herebelow 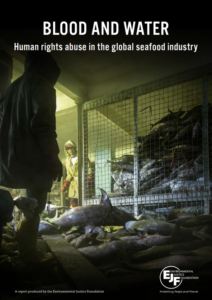