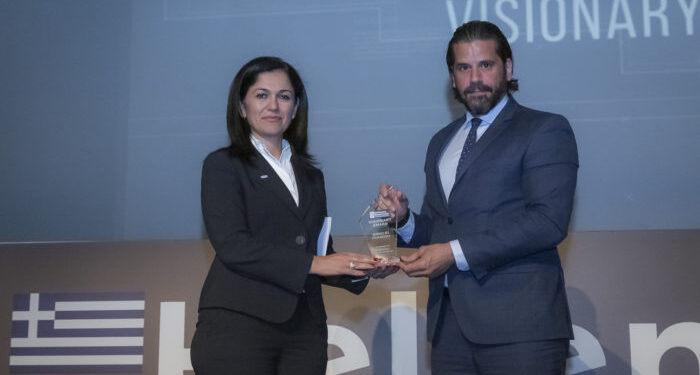 SAFETY4SEA, in collaboration with SHIPPINGInsight, is pleased to announce that Mrs. Angeliki Frangou has received the 2019 Hellenic American Maritime Visionary Award, sponsored by The Marshall Islands Ship Registry, at a gala dinner and award ceremony which successfully concluded on May 29th at Megaron Athens, The Banqueting Hall, the evening on day one of the inaugural Hellenic American Maritime Forum, in Athens.

Mrs. Anna Kalathakis received the award for establishing a visionary leadership in maritime community globally. Angeliki Frangou is the Chairwoman and CEO of the Navios Group. Angeliki Frangou has stated that shipping is in her DNA and her greatest passion, which has led her to establish four organizations. The organizations, which are valued more than $4 billion, are: Navios Maritime Acquisition Corporation, Navios Maritime Partners L.P,  Navios South American Logistics Inc and  Navios Maritime Holdings Inc.

Angeliki Frangou through her leadership has demonstrated her vision to sustainability and commitment in the shipping industry.

I am proud to be part of a great team in an industry filled with assets, as after all it is the judgement of people, whether to buy or sell, whether to repair or scrub, that has the most fundamental impact on the shipping company.

Armed with a degree in mechanical engineering, a background in finance and a family history in shipping, she was just 25 years old when she decided to be her own boss, after quitting a Job on Wall Street. In more than 20 years in the industry, Mrs. Frangou has gone from a single ship to operating a fleet of more than 100 vessels. In 2014, Fortune magazine included, Angeliki Frangou in the list of the 25 most successful women entrepreneurs worldwide. According to Lloyd’s List, she is the first woman among the top 20 most influential people within shipping industry in the world. Navios is headquartered in Piraeus, Greece but has offices in other countries and owns two ports in S. America.  Since February 2015, Mrs. Frangou has been a Member of the Board of the Union of Greek Shipowners, as well as a Member of the Board of Trustees of Fairleigh Dickinson University.

Other winners of the 2019 HAMF Awards are: Star Bulk Carriers Corp. for the Dry Bulk Operator Award, Viswa Lab for the Innovation Award, Panama Maritime Authority for the Maritime Centre Award, Wärtsilä for the Investment in Shipping Award, USCG for the Guardians of Industry Award, Mr. Nicky A. Pappadakis, Past Chairman of Intercargo, for the Maritime Advocate Award and Adm. (USCG Ret) Thad William Allen for the Lifetime Achievement Award.