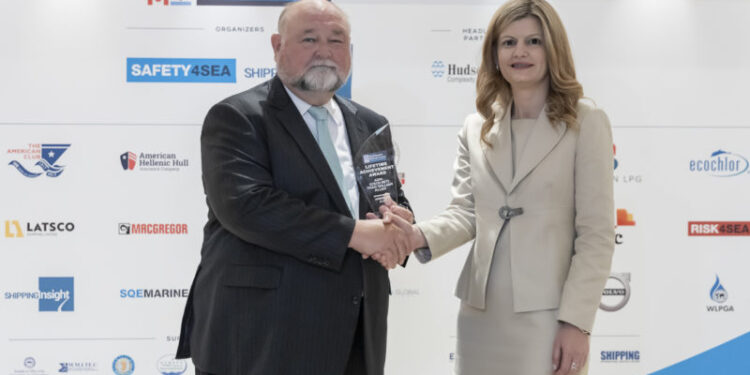 SAFETY4SEA, in collaboration with SHIPPINGInsight, is pleased to announce that Adm. (USCG Ret) Thad William Allen has received the 2019 Hellenic American Maritime Lifetime Achievement Award, sponsored by The American P&I Club, at a gala dinner and award ceremony which successfully concluded on May 29th at Megaron Athens, The Banqueting Hall, the evening on day one of the inaugural Hellenic American Maritime Forum, in Athens.

Adm. Thad Allen received the award for his outstanding career in the shipping industry. Admiral Thad Allen served as the 23rd Commandant of the Coast Guard from 2006 to 2010. He is now a U.S. Coast Guard retired and has recently joined HudsonAnalytix as a Senior Executive Advisor. His focus areas include regulatory and policy issues, crisis response and disaster management, environmental compliance, and cyber risk to shipping, ports, and supply chains.

It is indeed a great pleasure for me to be here tonight and present the life achievement award to Adm. Thad Allen, as a recognition and well-deserved acclaim for his hard work and dedication during his 40-year career in US Coast Guard.

I think we have learned for our time here that we need to honor the past but with priority the future. The challenges before the shipping community, environment, regulatory, trade and so on, require us to think about problems in an new way.

In 1971, Adm. Thad Allen graduated from the USCG Academy. He also holds a Master Degrees from The George Washington University and MIT Sloan School. In his four decades of service, Adm. Allen has held operational command both at sea and ashore, conducting missions to support the maritime safety, security and environmental stewardship interests of the nation. Adm. Allen was the lead federal official for the responses to Hurricanes Katrina and Rita and served as National Incident Commander for the Deepwater Horizon oil spill. He also directed Coast Guard operations in the wake of the 9/11 attacks and the Haitian Earthquake. Adm. Allen has received many honorary civilian awards for his widely praised performance and is a member of the Homeland Security Advisory Council.

Other winners of the 2019 HAMF Awards are: Star Bulk Carriers Corp. for the Dry Bulk Operator Award, Viswa Lab for the Innovation Award, Panama Maritime Authority for the Maritime Centre Award, Wärtsilä for the Investment in Shipping Award, USCG for the Guardians of Industry Award, Mrs. Angeliki Frangou, Chairwoman & CEO of the Navios Group, for the Visionary Award and Mr. Nicky A. Pappadakis, Past Chairman of Intercargo for the Maritime Advocate Award.