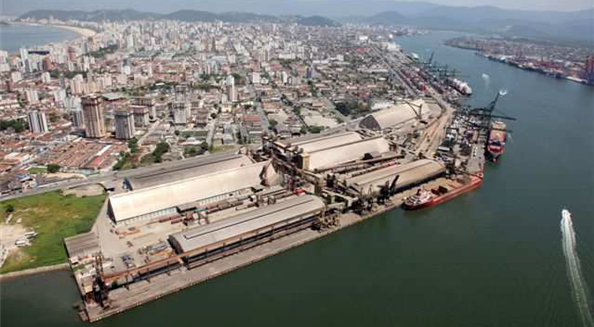 Image of Terminal ADM-39 at Santos, where grains are loaded. Credit: Skuld Club

Following the various claims of soybeans with excessive moisture content being loaded in Brazil and discharged in China, the Skuld P&I Club issued a circular, in order to provide an update on loading and storage conditions at Brazilian ports, especially in Santos and Paranagua, and also ports in Argentina.

The Club initially notes that delay due to heavy rain is often reported for cargoes transported from Cuiaba to Santarem, because of the bad conditions of part of the highway on the Amazon River. Many trucks got stuck in the mud and soybeans were transported back to the ports of Santos and Paranagua.

In addition, the Club informs on the storage conditions in Santos and Paranagua, as well as in Argentina. Specifically, trucks and railcars transfer the soybeans cargo, covered with heavy tarpaulins, from farms to warehouses in Santos and Paranagua. Loading in these ports is done by means of shiploaders, supplied by conveyor belts from warehouses. All the cargo is stored in warehouses instead of in open yards.

In Argentina, several provinces of the country experienced heavy rains, resulting in floods in crop areas, especially soya and maize which have been harvested or will be harvested soon.

Skuld Club suggests that, after the harvest, there can be different scenarios for the subsequent storage:

The club recommends that: