Marine life at risk because of ocean oxygen loss

An increasing phenomenon threatening the fish species and disrupting ecosystems in analysed in the newly launched "Ocean deoxygenation: Everyone's problem" report, highlighting the dangers caused by the deoxygenation in the marine environment.

Specifically, the report, issued by the International Union for Conservation of Nature (IUCN), was released on Saturday at the COP25 UN Climate Change conference in Madrid.

It alerts that the world has to act faster to save the marine environment from the human activities. Working with 67 scientific experts from 51 institutes in 17 countries, what is presented here is the largest peer-reviewed study conducted so far on ocean deoxygenation.

Different analyses conclude that the global ocean oxygen content has decreased by 1-2% since the middle of the 20th century. Global warmingis expected to have contributed to this decrease, directly because the solubility of oxygen in warmer waters decreases, and indirectly through changes in the physical and biogeochemical dynamics.

The ocean deoxygenation has a serious impact on marine organisms as soon as conditions depart from full aeration, with downstream consequences on their activities and capacity to face natural contingencies.

In addition, deoxygenation begins to change the norm of marine life (life-cycle), in favour of low-oxygen tolerant species, such as microbes, jellyfish and some squid, at the expense of low-oxygen sensitive ones, as many marine species, including most fish. 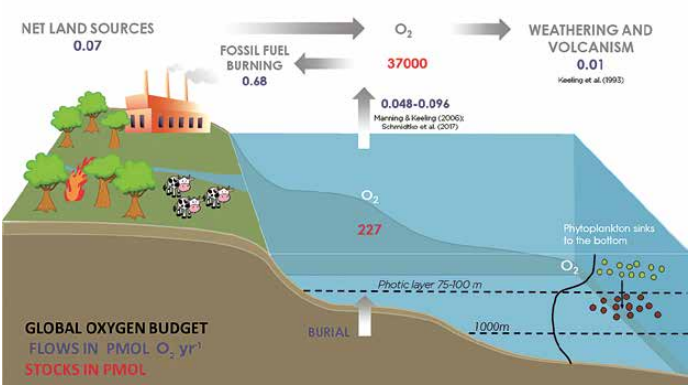 According to the report, the loss of ocean is due to two overlying factors:

Ocean warming, ocean deoxygenation, and ocean acidification are major ‘stressors’ on marine systems and typically co-occur because they share a common cause.

It is also expected that the ocean will lose 3-4% of its oxygen inventory globally by 2100; Yet, the global average masks local changes that are predicted to be, for example, more severe in mid to high latitudes. Most of the losses are predicted to be concentrated in the upper 1,000 meters of the water column, which is richest in marine biodiversity.

There is good evidence that ocean temperature increases explain about 50% of oxygen loss in the upper 1000 m of the ocean, but there is less confidence of the knock-on effect on respiration – another factor to explain lowered oxygen 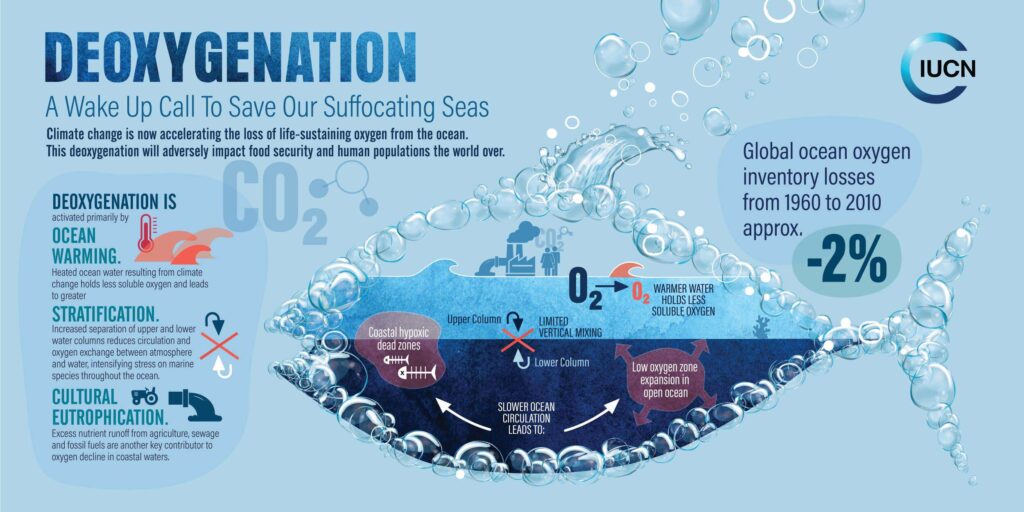 It is predicted that there will be distinct regional differences in the intensity of oxygen loss as well as variations in ecological and biogeochemical impacts.

Perhaps the most familiar areas subject to low oxygen are the Baltic Sea and Black Sea. These are the world’s largest semi-enclosed low oxygen marine ecosystems.

While the deep basin of the Black Sea is naturally anoxic, the low oxygen conditions currently observed in the Baltic Sea have been caused by human activities and are the result of enhanced nutrient inputs from land, exacerbated by global warming.

This report on ocean deoxygenation is perhaps the ultimate wake-up call needed to dramatically raise our ambitions to tackle and immediately curb our emissions of carbon dioxide and other powerful greenhouse gases such as methane.

Dan Laffoley, Senior Advisor Marine Science and Conservation in IUCN's Global Marine and Polar Programme and a co-editor of the report, commented that

We are now seeing increasingly low levels of dissolved oxygen across large areas of the open ocean. This is perhaps the ultimate wake-up call from the uncontrolled experiment humanity is unleashing on the world’s ocean as carbon emissions continue to increase. 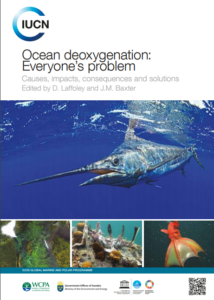