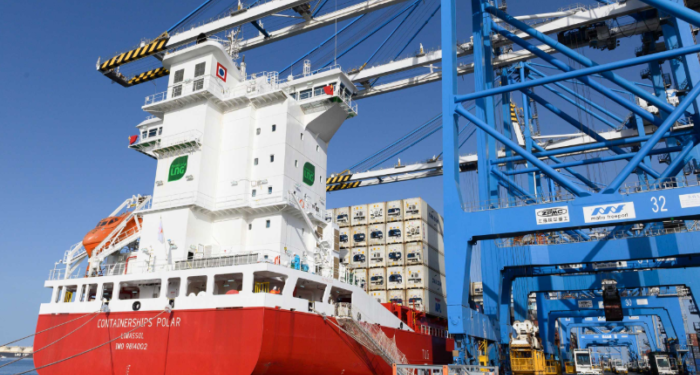 Malta Freeport Terminals welcomed the first ever LNG-fueled container ship to visit Malta during the course of the vessel’s maiden voyage from Asia to Rotterdam. The ‘Containerships Polar’ discharged more than 560 containers during its call to Malta.

Containerships Polar is also the second in a series of four LNG-fueled vessels put into service by CMA CGM.

By attracting to our country container vessels of this type, we are moving a step ahead towards cleaner seas and a better environment

This development comes to add to other initiatives like the regeneration of the promenade, afforestation in the Benghajsa area, the recreational park and multi-storey carpark on which works will start soon, sound-friendly cranes, a double glazing scheme, and numerous opportunities that Malta Freeport Terminals will propose and implement.

In addition, Malta Freeport has invested €31 million over the last year in 15 Kone Rubber-Tyred Gantry Cranes (RTGs), as well as in other yard equipment including 67 new tractors and trailers.